Published: July 2, 2013
By: Bethany Rees
Robert Delong will most certainly “make you fucking dance.” Hailing from Bothell, a suburb of Seattle, and now based in LA, he was named one of MTV’s 2013 Artists to Watch.  His style is fresh and innovative, and I met up with him last month before he performed at Firefly Music Festival in Dover, DE.
A drummer since the age of 10, you’ve been in a number of indie rock bands, can you describe how you transitioned into being a one-man-band? 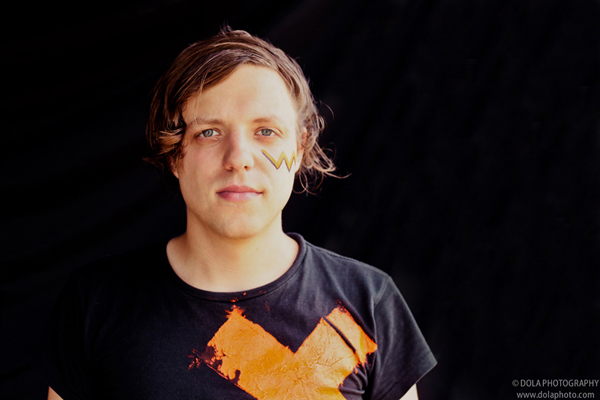 Yea, like you said I started playing drums when I was 10, and I played in indie rock bands, folk bands, but all the while I was producing music on my own, and recording myself. At some point, because I was a computer nerd, it kind of made sense and I started getting into electronic production, kind of even before I started listening to electronic music. Probably around the end of high school was when I really started diving into electronic music. I moved to LA around then and a few years later I discovered dance music, and then it all clicked. As a drummer, dance music made a lot of sense to me, and then I started producing stuff, and at some point it kind of overtook all my other projects and consumed all my time, so I focused all my efforts on that.
How has Seattle been in response to your music?
It’s cool, there is kind of a burgeoning dance scene there. There wasn’t a lot of that type of music when I was growing up there but the response has been great. Local radio stations there have been playing a lot of my stuff and any time I’ve played there I’ve always had good crowds that have been really into it. It’s interesting to see all around the states how people react differently.
Was there a defining moment for you when you realized that fans were really connecting with the type of music you make?
I guess the first time it really struck me was back in late September 2012. I played this festival in upstate NY called Pearl Palooza, which was put on by this radio station that had been rocking a demo version of "Global Concepts." It just kind of blew up on their radio station, so it was the first time I got to play for a few thousand people in the street. It was kind of the first big show I had done like that, and just seeing and hearing the response was that moment.
Your girlfriend Heidi is a visual artist who does face painting at your shows.  How did you decide to incorporate this extra element into your live performance?
It kind of started early on, just because her and her friends were always getting their faces painted before shows, and then other people started to see it at my shows and wanted to be a part of it.  It kind of gives people a way to feel like they are a part of the show and really get into it, and it’s cool for me because it helps to really define me. I have a really specific visual aesthetic now because of that. I feel like it somehow connects with the whole futuristic idea as well, because its orange and bright…kind of has a tribal mentality to it. You know, people get on their war paint to go have a good time, haha.
How did you come up with the X?
I asked Heidi to just paint something on my headphones and that was one of the things she painted, and one of my roommates was a graphic designer and he kind of finalized it. That’s pretty much the story. It kind of became my branding and what people associated with me.
You use a Wii remote and a Logitech joystick hooked up to a midi interface, can you explain why you decided to incorporate that into your setup?
I had some of these things laying around, and I saw that people had been hacking them. It seemed like it would be a fun thing to experiment and mess around with, and after awhile I started using them at shows and performing with them, and for people it was kind of a cool, novel thing.
Are there any other performers live shows that you really enjoy and that have inspired you in your own live performance?
Definitely. Some of my favorite artists right now are Lucy and Donato Dozzy, who are both kind of on the more experimental end of DJing. But a lot of things that kind of inspired me initially was just going to see cool underground electronic duos, in Los Angeles especially, who were doing things like circuit bending, stuff like that. And it was cool seeing artists like that, but you didn’t see a lot of people taking that to the dance music side of things, it was always very experimental music. I kind of wanted to take some of those ideas and kind of bring it to, I guess what you would call, the more mainstream dance music scene.
If you could meet anyone dead or alive, is there anyone that you would want to meet?  Musician or non-musician?
As far as musicians, I think Brian Eno. I think he’s sort of a genius and he’s done so much for music in the last 30 years. Non musician, Steven Hawking would be pretty cool, that’d be a weird conversation haha.


Haha, definitely.  You’ve said your lyrics have a preoccupation with the ontological, based on being or existence.  Do you feel like fans connect a lot to that aspect of your music?
You know, I get a range. Some people just love the fact that I make fun, melodic dance music that they can get down to. Other people, I do find, really connect with that, and it’s cool that people can exist in both worlds. I don’t mind if people aren’t worried about the philosophy and they’re just having a good time though. I think that’s great. But also, I think it’s cool that for some people it’s really meaningful. Generally, to me, I want my lyrics to be vague enough that anyone can kind of apply their own meaning to it.
Are there any artists that inspired you along the way?
Some of my favorite bands would be Radiohead and the Talking Heads. Growing up I think some of the bands that really influenced the way I write music, since I grew up in Seattle, right at the end of high school some of the bands that were up and coming in the industry were Death Cab, Modest Mouse, David Bazan, Jeremy Enigk, all that. I think those artists really influenced the way I write songs. I don’t necessarily listen to a lot of them anymore but I think you can kind of hear the way I write melodies, or my choice of timbre comes from those artists.
What artists would you love to tour with?
A lot of artists, haha. I think it would be a lot of fun to go on tour with an artist like Grouplove. I think they’re really fun, they put on a really fun show. We’re totally different but I think their energy is kind of a good match. I’d also love to go on tour with, this is obviously a stretch, but someone like Diplo, someone that is fun and plays crazy dance music, has a huge electronic show.
OK last question..…what’s your favorite breakfast food?
Hm, probably like a chorizo breakfast burrito. LA, you know… can’t really escape it!