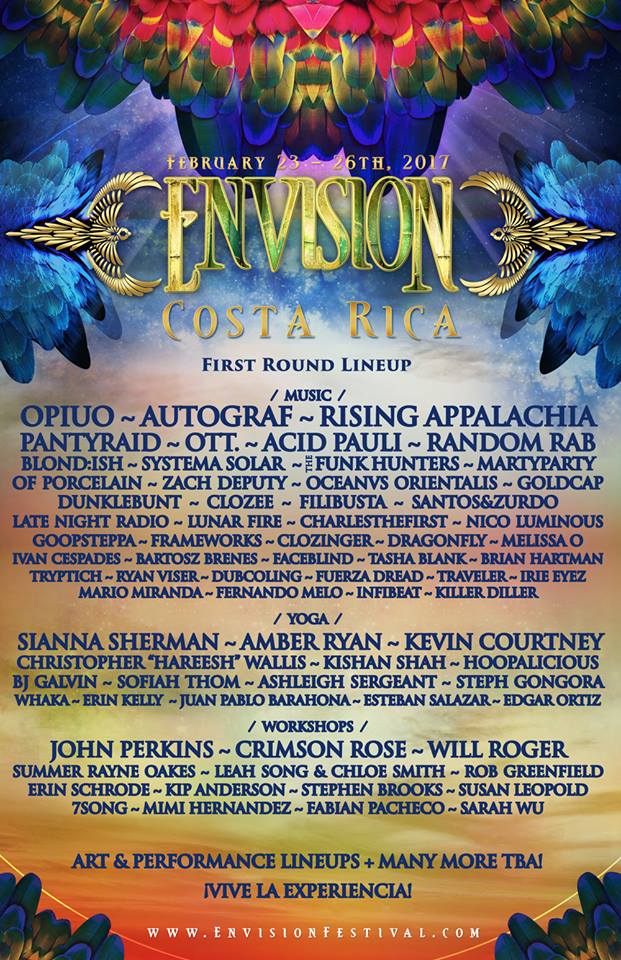 Each year, thousands of music fans from around the globe flock to the gorgeous Pacific coast of souther Costa Rica to revel in a weeklong community where the music flows as freely as the ecological education. With all the kinks worked out over years of trial and error, Envision Festival now sells out with regularity and has planted deep roots at its home of Rancho La Merced in Uvita, Puntarenas.

From February 23-26, 2017, the fans return from Asia, Africa, South America, Europe, Australia, and from right here in the United States to the sleepy Central American hamlet by the ocean. What brings them there? If it's not the dazzling artwork, the incredibly intricate and mind-blowingly produced stages, and the dawn to dusk yoga, healing, educational, spiritual, and scientific workshops, and the breathtaking views, it's gotta be the lineup.

As usual, Envision doesn't disappoint. Headliners Opiuo, Autograf, and Rising Appalachia command the top line with a wildly diverse catalog of sounds. With glitch-hop, indie electronic house, and eclectic folk handled, the rest of the roster displays an ingenious mix.

Pantyraid gets a triple dip with its solo members Martin Folb and Joshua Mayer getting MartyParty and Of Porcelain sets. Psychedelic dub and soothing downtempo are prominently on display with Ott, Random Rab, and Frameworks. It gets a little down and glitchy with CloZee, Filibusta, Dubcoling, and Irie Eyez. And there are definitely some opportunities for collaboration as Scarfinger joins the bill for his duo with CloZee as CloZinger, and Ryan Viser hops on the bill with his future funk sound—but we all know he can throw it down on trumpet with Frameworks.

The stacked yoga and workshop lineups will be joined by bursting arrays of artists in the coming weeks, as well as many more artists who will join the stacked bill. We'll mention it again, because it bears repeating: this shindig sells out every year, so you want to jump on your tickets ASAP. There is no reason to delay. You don't want to miss this unique opportunity to see incredible music amongst the natural beauty of Costa Rica's Pacific coast.

Visit envisionfestival.com for all the info, travel guides, FAQ's, and more.