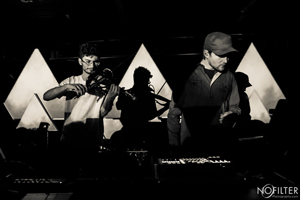 When Emancipator brings his tour to your town, everything else simply gets put on hold. It doesn’t matter if you’re scheduled to work or have a final at eight o’clock the next morning, because you will be attending that concert. Whether you live two minutes from the venue or even two hours, it’s time to set aside all responsibilities, snag yourself a case of microbrews, and make haste to the front row.

This is exactly what Oregon concertgoers did on March 12th, alleviating the stressful burdens of dead week with an ample supply of symphonic instrumentations. Eugene possesses the perfect vibe for a tour like this, hosted by the good people at Every Element Productions, and held at the historic Wow Hall.


Kick starting the unforgettable evening was Odesza (BeachesBeaches+ Catacombkid), delivering a chilling performance as the crowds filtered in. The Seattle based duo instantly immersed the ecstatic audience with dance-worthy synth sections, consistently bobbing their heads while rockin’ smiles from ear to ear. Odesza dazzled listeners with visceral tunes from their debut album, effortlessly mixing on their Ableton AKAI’s while dropping tracks like “IPlayYouListen,” “Don’t Stop,” “Rely,” and “How Did I Get Here.” Their hour-long performance seemingly passed by in the blink of an eye, leaving attendees thirsty for more music, and a couple quick drinks from the bar downstairs.

Swiftly following Odesza’s blissful set was Little People (Laurent Clerc). The producer out of London wasted no time snagging the crowd’s undivided attention, surging the venue with copious supplies of ethereal bass bursts before dropping his trademark style of instrumental hip-hip. Clerc faced each of his elaborate MPC devices towards the audience, allowing them the honor of witnessing each stroke of his dancing fingertips. Crowd favorites included clock-stopping tunes like “Moon” (Little People’s Western Lies Remix), “This Music is Not My Own,” “Wonderland,” and “Start Shooting” (Little People’s Americana Remix), wooing the dance floor as ubiquitous vocal samples from Neil Young swept across each listener’s conscious.


After a short intermission, the moment everyone had thoroughly anticipated for weeks in advance finally arrived. Emancipator (Doug Appling) stepped on stage, calm, cool, and collected as could be, than began his nostalgic journey through countless embodiments of heart-stopping soundscapes. IIya Goldberg stood by his side, gripping each listener’s cerebellum with luscious violins tones as Appling unleashed bewitching tunes from his impressive collection. This included heavenly songs like “Anthem,” “First Snow,” “Soon It Will Be Cold Enough to Build Fires,” “When I Go,” and “Neverland” from his freshman and sophomore efforts, along with mesmerizing renditions of “Elephant Survival” and “Shook” (Mobb Deep X Sigur Rós). Emancipator also graced the crowd’s ear cavities with ambient creations from his recently released third album entitled Dusk To Dawn, simultaneously moving the soul and feet of each attendee while dropping “Valhalla,” “Minor Cause,” and “The Way.”

Emancipator, Little People and Odezsa stepped into Eugene on a mission to bring forward-thinking soundscapes to fellow music lovers, and they did just that. These three artists continue to innovate with each tantalizing tune they release, and experiencing this rampant progression live is breathtaking to say the least.