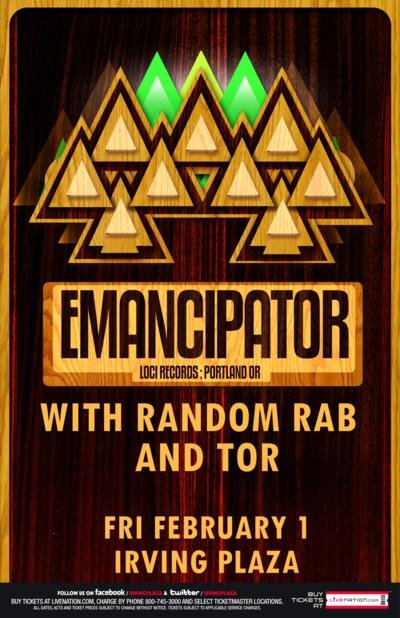 There are few things in this world better than exploring a great new album, especially one produced by an artist you already appreciate and respect. There’s a certain intrigue and excitement that accompanies each new track, with the listener wondering how the album will evolve and how it will thematically depart from that artist’s established musical lexicon.

Even better though is to couple the excitement of a great new album with the opportunity to see that fresh material transposed into the live setting.

This is precisely the scenario experienced by the audience at Manhattan’s Irving Plaza this past Friday night as Portland-based trip hop producer Emancipator (Doug Appling) and violinist Ilya Goldberg hit the stage for a sold-out crowd, literally one day after releasing his most recent studio effort Dusk to Dawn.

Let’s take a closer look at how it went down.

When considering the general composition of the crowd at an electronic concert these days, many would conjure up images of brightly-dressed teenagers dancing wildly with little consideration for the personal space of those around them.

However, the Emancipator crowd is a different beast. Anyone who has given his catalogue a serious listen can tell you that his compositions are far more thought-provoking and complex than those of his peers. Nonetheless, his powerful drum parts and infectious melodies distance his catalogue from strictly ‘headphone music’ and give his beats a distinct dance floor appeal.

The result of this duality is that his audience isn’t so much using the concert as a rage vehicle. It’s more. The movement comes out in a more inspired way because people are really listening.

And while there is certainly nothing wrong with music that serves as a background catalyst to help you and your friends go bonkers, there was something very refreshing about a crowd so totally interested in the activity coming from the stage.

Also, when one thinks of a sold-out crowd at a general admission venue in the middle of New York City, it’s usually fair to assume it will be hot and overcrowded. However, the management at Irving Plaza managed to keep the place full and lively without the sardine effect. The ventilation was on point as well.

Prodigy: It’s hard to argue that many of Emancipator’s tracks would be nicely accompanied by some hip-hop vocals. Well as luck would have it, Prodigy (Mobb Deep) came out mid-set to spit a short, sweet verse. Maybe next time Mos Def will roll through.

Heavy hitters: While the first part of the set musically went through many of the chilled-out classic hits on Emancipator’s first two albums, there were moments in the latter part of the performance where Appling and Golberg launched into some seriously uplifting crescendos. Highlights included a great remix of Lauryn Hill’s "Ready or Not" as well as Outkast’s "B.O.B." in addition to dance-friendly track "The Way" off Dusk to Dawn (which features some blasting horn courtesy of Big Gigantic’s Dominic Lalli). 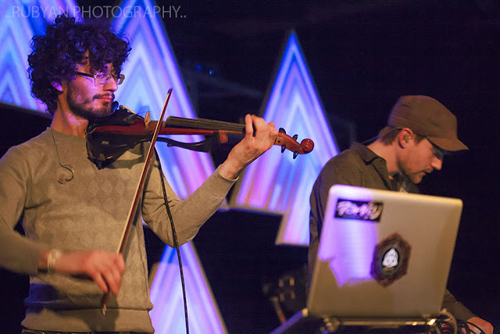 For this tour, Emancipator is traveling with a video-mapped, LED panel display composed of about a dozen mini mountains; a well conceived visual supplement to the music.

The mountains seemed to move with the unmistakable ebb and flow of an Emancipator performance, heating up to fiery pinks and oranges when the set peaked and settling into the Earth tones and glints of sunlight from the new "Minor Cause" (opener from Dusk to Dawn) music video.

Getting to experience a live performance that incorporated exciting new tracks the audience was only just able to fully explore outside the venue made for a most dynamic concert experience.

Emancipator’s show has grown both musically and visually, and if he keeps up the formula he’s deployed in his career so far, his performances will continue to organically grow into larger and larger venues while his music spreads to thousands more ears.

If you have the opportunity, get yourself to one of the stops on Emancipator’s tour and be sure to prepare by streaming or downloading a copy of Dusk to Dawn from Appling’s label, Loci Records.