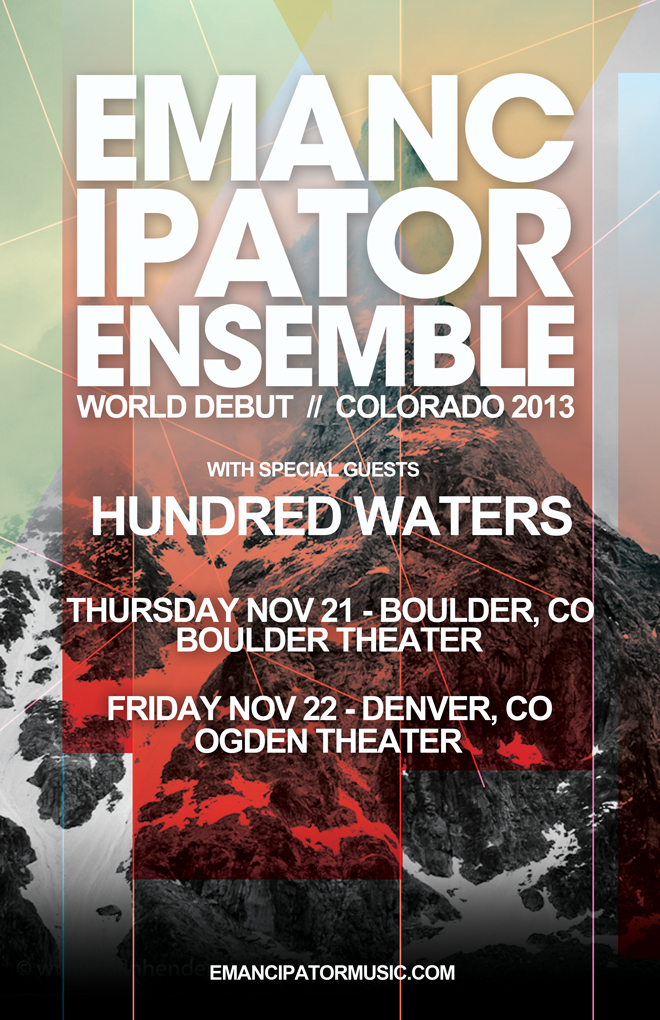 If there is any electronic music artist whose work begs to be performed by a live band, it’s Emancipator, the project of downtempo whiz Doug Appling. The full band has become a trend in electronic music recently. Bonobo does it. Pretty Lights does it. And finally – FINALLY – Emancipator does it, too.

It’s a Thursday night in Colorado, 18 degrees out. I just drove for an hour and a half, dodging suburban mothers in minivans driving 20 mph because it snowed two inches. The year’s first snow invariably turns everyone into terrified amnesiac idiots who forget that it’s impossible to spin out on dry roads. Suppressing my road rage is difficult, but important things are afoot.

I’ve been waiting for this show for months, but also for years. ­Soon It Will Be Cold Enough is my favorite album, hands down, and I’ve been saying since 2009 to anyone who will listen that an Emancipator show with a live band is an inevitability.

We finally pull into Boulder and park around the corner from the theater. I chug three beers in my car and promptly regurgitate them onto a tree in an effort to provide it with nutrients. The will call line is absurdly long. My girlfriend is near hypothermic by the time we get inside but the temperature change from out to in must be at least 60 degrees and I’m soon wishing brutal death upon whatever asshole invented the beanie.

The Ensemble comes on stage just after 11 pm to raucous applause, opening with “Lionheart,” “Dusk to Dawn,” and “Elephant Survival.” There is a reason the band’s first two shows are in Colorado – the crowd’s excitement is palpable and it’s obvious people here love Emancipator.

Anyone who’s seen them before will recognize Appling and violinist Ilya Goldberg, who have been performing live together for a couple years. Appling presses buttons and plays guitar, and Goldberg’s violin and mandolin have always provided a nice complement.

The new members of the band take the performance to another level, especially drummer Colby Buckler, formerly of Two Fresh and OG Status. A large part of Emancipator’s appeal is his drums beats. Buckler recreates them perfectly. He’s a baby-faced badass, and I kind of wish I was him.

The final member plays bass. I have no idea what his name is – I couldn’t understand Appling when he introduced the band and his PR people never got back to me – but he looks like Chris McCandless from Into the Wild, he doesn’t wear shoes onstage and he spends the set nonchalantly laying down tasty bass lines like it’s nuthin’.

Most people label Emancipator’s music as “chill,” which trails only “epic” and “banger” as the most annoyingly overused musical descriptor. I take umbrage at this characterization. Just because there’s no giant drop and the BPMs are under 120 doesn’t mean it’s not danceable. The dude spinning circles next to me would agree, as would the couple in front of me dripping sweat and Zumba-dancing and the guy next to them doing crazy stuff with his hands.

Near the end of the set Big Gigantic’s Dominic Lalli makes a cameo during “The Way” and saxes it up in typical style. I am fully convinced that “Dom” is secretly a set of identical triplets. He is omnipresent. No single human could be in as many places as him.

Other highlights include “Minor Cause,” “Old Devil” and “Smoke Signals,” but this is a show that I genuinely didn’t want to end. The songs are polished, the set has a good mix of all three Emancipator albums, and a couple unreleased songs and the drums and bass make this a whole different experience from a standard Emancipator set.
Appling is a mastermind, and Emancipator Ensemble is not a show to be missed. If they come within 200 miles and you choose not to go, you deserve all the bad things that happen to you in life.