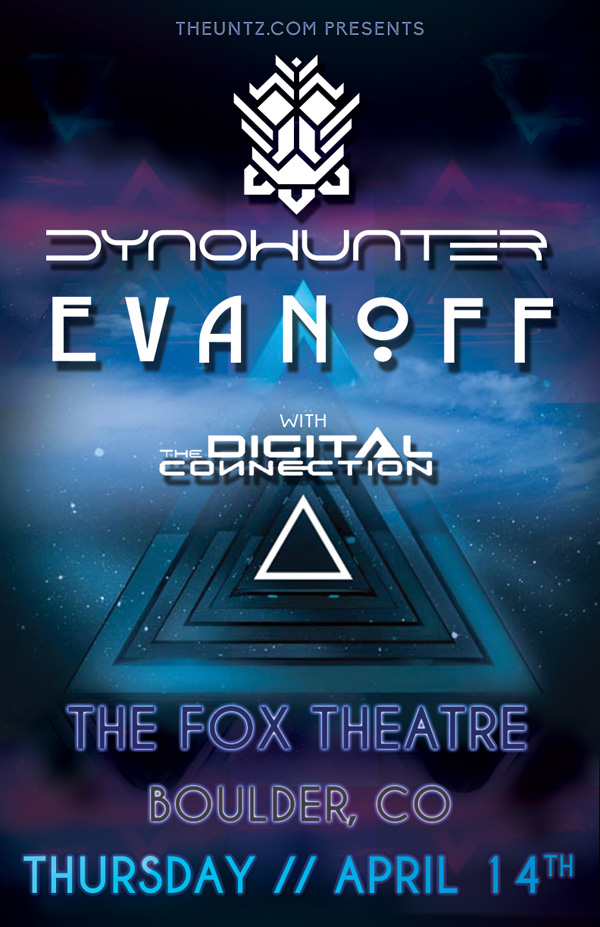 As we ramp up towards The Untz Festival in Mariposa, CA from June 2-4, we'll be getting involved with a ton of great club dates along the way that show off the sheer power and tenacity of the rising stars on our lineup. And when it comes to power and tenacity, you don't get much better than DYNOHUNTER and Evanoff.

Dynohunter, the power trio comprised of producer and saxophonist Clark Smith, bassist Fred Reisen, and drummer Justin Ehmer, just crushed the Bluebird Theater in Denver, CO for its first headlining date in one of their biggest markets, but the band is returning to its Boulder, CO home at The Fox Theatre on April 14th for a hometown throwdown that will not soon be forgotten.

With its new tech house sound locked in, the livetronica powerhouse is rapidly approaching the release of a brand new album, and honing its sound in the studio and on-stage. Before this April date, the trio still has to hit Tucson, AZ for Gem & Jam in the middle of next month, and then its back into the studio to pound out some more work.

Opening up the night is Ricky Shine, a.k.a. The Digital Connection. Last year, Shine released a downtempo album, Chasing the Morning Sky, via one of our favorite labels, Gravitas Recordings. But don't expect a ton of chill music from The Digital Connection, as he'll be getting things warmed up for a night of rockin'.

TheUntz.com is presenting this behemoth of a lineup, and early bird tickets are only $10, so swoop those while you can by clicking here: http://bit.ly/1RXF6Pg. You've been warned.