The most recent release in a plentiful bounty of productions by Derek VanScoten, better known as D.V.S*, is the downtempo dance dreamscape album Hit the Clouds Running. A lot of collaboration went into the creation of this soundtrack, featuring guest artists such as Govinda and Psymbionic, as well as a myriad of vocalists and instrumentalists. The result is a lighthearted, groovy progression full of eclecticism. Elements of EDM are mixed with indie rock guitar (think Ratatat), trap beats, folk banjo plucking, funk bass slapping, classical re-takes, and mildly forlorn, but nonetheless beautiful vocal samplings.

The sound collection of this album stretchs across the sonic troposphere; your ears are lifted on a nimbus of discrete ethereal pads, and your feet are earthed by fuzzy, cuddly, thumping bass. Majestic, ballad guitar wails throughout the tracks, creating an emotional powerhouse sound better than any riffs that could have been pulled from your favotire 80's hair metal hits. Combine these elements with passionate solo violin and you get track number three, "Peppermint Sky," a heartfelt duet with haunting call and response melody. A light touch of haripsichord is also included, completing that vintage fop-rock feel with an electronically regal air.

Hit the Clouds Running is permeated with enchanting  melodies. I am two days into listening to this album, and the words from "Roll the Dice" featuring Chantel have planted themselves comfortably in my ear. I woke up with them on a loop in my brain. I bumped them through the ghetto-rigged speakers in my little Honda Civic wagon three times in a one hour drive. Although, if I had some higher quality sound equipment and I wasn't afraid that the bass would rattle my hooptie to pieces, I definitely would have been pushing "Trapsody in Blue," a track intensly focused on rhythm and bass. This one will give you some much needed musical bodywork; a good sub rub for your feet. 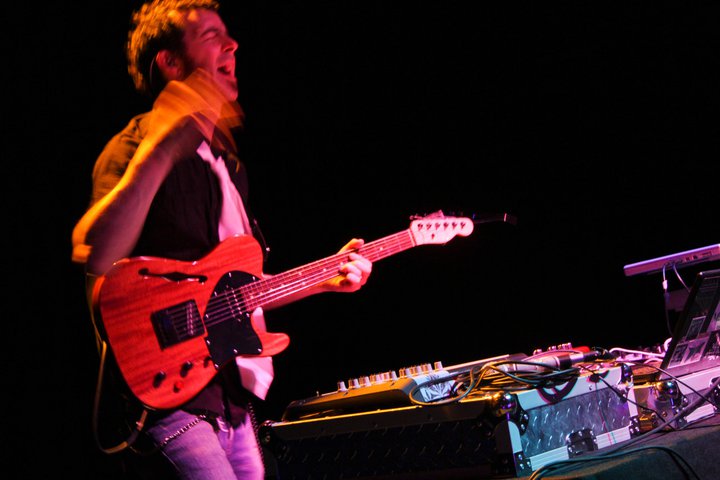 Although the album is considered "downtempo," a technical drum-kit or some creative percussive element always ticking away at the smallest subdivisions will allow you to take the energy level up a notch if you're feeling more kinetic. Hit the Clouds Running has a strong notion of progression;  a sense of climbing or traveling, moving forward.

With the album art and intent of the producer in mind,  it conjures up an image of dream walking. An impression of the  nocturnal self running through the lucid images of the mind, ceaslessly running from one situation to the next, perceiving and absorbing the surreal scenery that surrounds, yet always traveling onward.

Hit the Clouds Running is available for download from the Gravitas Recordings Bandcamp for a free/ pay what you want sliding scale donation. With this album, D.V.S* joins the flight of post-rock dream-pop with a grooving, grounding electronic beat.