That's right, the Dirtwire boys are back.

Road-hungry and fresh out the studio, Evan Fraser, David Satori, and Mark Reveley are headed back out on tour with a ferocity ahead of the release of Showdown, which drops March 9th. Jam-packed with global instrumentation, modern production techniques, and a penchant for dusty dance parties, this latest album from the act now solidly touring, writing, and performing as a trio is cohesive, well-versed, and as at home on a benefit concert simulcast by PBS from the Kennedy Center as it would be on the Playa. 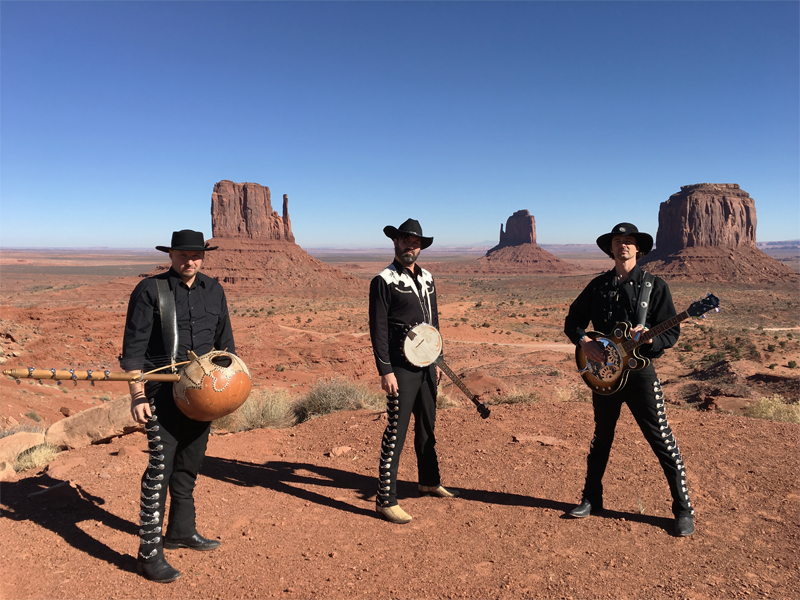 I had my pick of the litter, but my ears were drawn to “GoGo” to premiere for The Untz fans today. Not just because the nation's capital is close to my heart, and the music popularized by Chuck Brown and many an unsung hero on U Street is a vital thread in the tapestry of hip-hop, electronic, and dance music writ large, but also because I'm a sucker for the desert blues of Mali and the folk melodies of the Touareg. Dirtwire always, always, always knows how to spin a new sound from disparate subgenres, and the more challenging and distant they seem, the better the result. Every damn time.

“It’s a swingin’, heavily percussive, call and response sound unique to the capital,” Satori notes. “We made our own spinoff version of the beat featuring the kamale ngoni (African harp), electric banjo, fiddle, cowbells, and a whole section of kazoos playing the horn lines.”

“GoGo” is sexy, fun, and energetic. Imagine throwing back a suspect liquor drink with Ali Farke Toure and Johnny Lee Hooker in a back alley in Bamako. You'll maybe start to get it. And that ngoni sound. You can see the gourd-shaped kora in Fraser's hands in this pic—imagine a smaller, more delicate, but nonetheless powerful version. Each pluck hits me in my solar plexus. For the last few years, one of my all-time favorite acts, Toubab Krewe, has suffered reduced output, but this tune just plugged that giant hole in my heart.

The whole album is solid. Go ahead and pre-order Showdown before it drops new week.