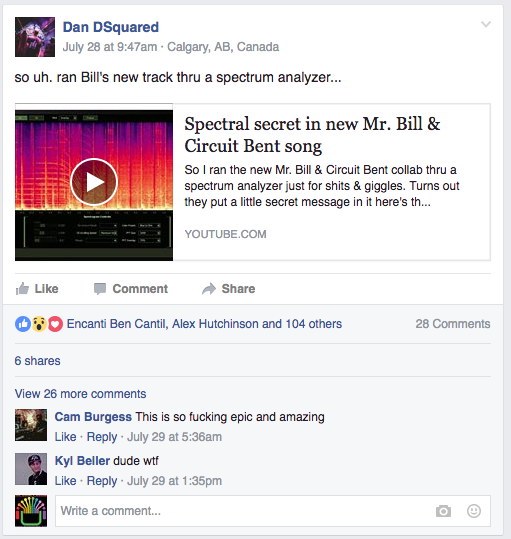 Did Mr. Bill and Circuit Bent try to pull a fast one on all of us? Something hidden in their new collab, “Midichondria,” seems to show that the two are up to something awesome.

The track itself is pretty awesome, with phenomenal glitchy sound design and an upbeat, psychedelic nature. According to Facebook user Dan DSquared, an intriguing bit of sound before the second drop got him a bit suspicious about its contents. Using iZotope’s Ozone mastering system, Dan ran the track through the Spectrum Analysis function of the plugin and found something interesting.

According to Dan, the two most likely uploaded an image into a wavetable synth, which most likely explains the circular sound of the high-end noise that we hear. Now where the balloons and airplane comes into play, that we can’t be too sure of.

Keep your eyes peeled for an announcement from these two extraordinarily talented producers soon! We’re sure this wasn’t just some sort of coincidence... watch the video below and decide for yourself.