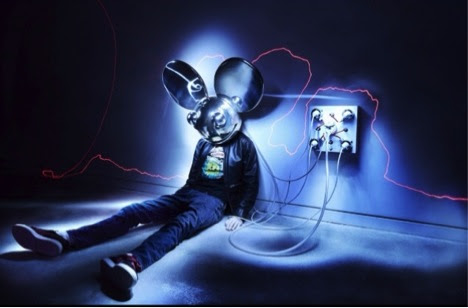 For fans wondering what Joel Zimmerman has been up to, of late, a flood of answers is revealed today. Besides stepping in for an ailing Avicii at Ultra Music Festival back in March, deadmau5 has been relatively quiet (besides, of course, the Twitter shenanigan here and there).

Flurries of activity on the legendary producer's SoundCloud page in fits and spurts over the past 6 months did lead to some speculation, but all questions are answered with the announcement that Zimmerman has been working on while(1<2), a sprawling two-disc release, slated for a June 17th unveiling (pre-orders begin May 20).

What he calls "his first proper body of work," gets a 30-second teaser in the form of "Avaritia." You can hear the full song this Friday's on Pete Tong's BBC1 show. The consensus is that it's not a major shift in the mau5-man's sound, but really an extensive exploration of all its facets. Last fall, it was announced Zimmerman was joining forces with major label Astralwerks. As such, this will be a joint release with his mau5trap imprint.

Here's what the producer had to say about his forthcoming double-disc:

It’s a good mix of shit I want to do versus shit people want to hear or what they would expect. It’s a good balance. It’s not like, ‘Oh, it’s such a departure. He’s doing smooth jazz. It was when I was working on some live stuff, setlists for shows and stuff like that, and it just must have been a couple of tracks that sounded pretty good stitched together end to start and I thought, “Well, if I ever do an album or compile this into some kind of album this has got to be that part of the order for that.” And I just kind of took everything and played musical Tetris with it.