Disco is back, and it's better than ever. The dark days of the Disco Demolition are behind us, and the resurgence in warm grooves, glittering melodies, and unflappable attire puts a smile on our faces. One act in particular is ready to make a splash with its live take on the genre.
Introducing Chrome Drones out of Denver, CO. Featuring members of Signal Path, Tiger Party, and Particle, this funky five piece is fusing deep grooves with soaring climaxes, tying together disco and house with unmatched technical proficiency. 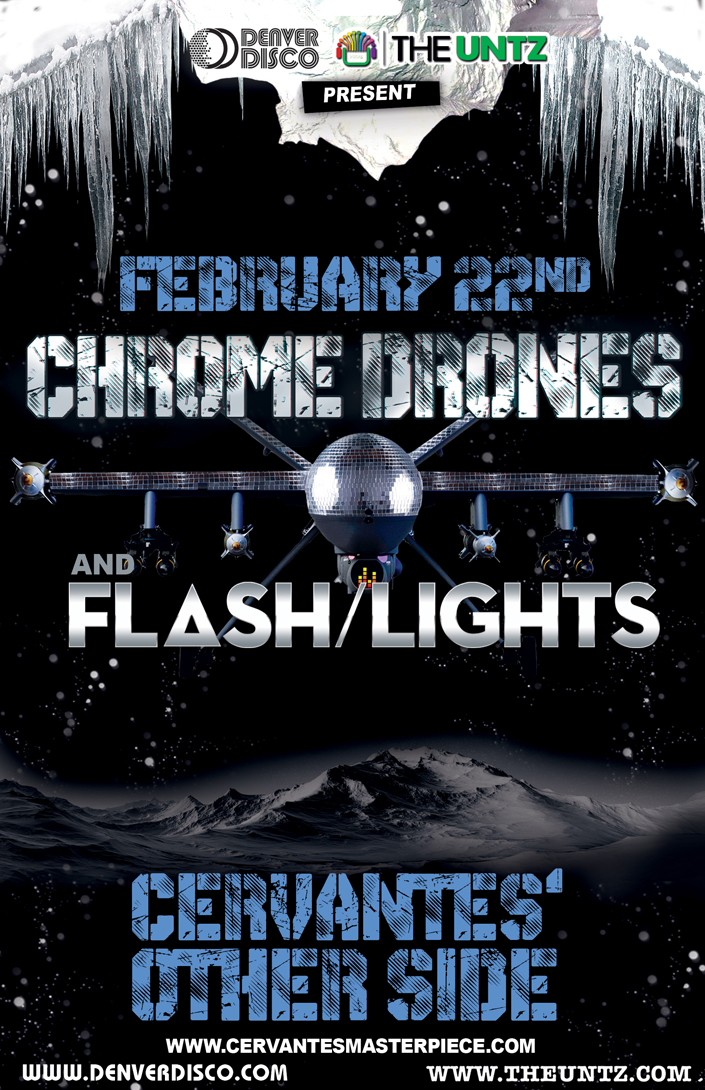 Their debut studio track, "In The Sky," is all yours for free. This addictive cut is slathered with a hypnotic battery of bass and drums--light, flowing, and fun. You can hear just how hard its going to crush on stage. And fans in Denver will get to experience just that on February 22nd, when the band makes its first appearance at Cervantes Masterpiece Ballroom with Flash/Lights presented by Denver Disco and TheUntz.com!

Drummer Damon Metzner sat down with his bandmate, Cody Wille (production/turntables) to grill him on his feline fetish and work out some logistics of the brand new band.


What's been the most hilarious and/or disastrous thing to happen to you in the last month?


It wasn't very disastrous, but it was funny. I was leaving a bar very late and had had a few too many. My friend I was with at the time saw a new sculpture of a giant bear made out of individual nails. What he hadn't noticed was that Tobey Maguire was standing right in front of this thing. My buddy started screaming and yelling "everyone come check this out, I can't believe this!" You could see Tobey's face drop, just sitting there thinking "I don't want to deal with this crazy fan right now. I'm drunk and on vacation and it's 3 AM." My buddy just ran right up to the nail bear and without any hesitation turned to Tobey and said "Holy shit Spiderman! Did you check out his fuckin nail bear?! Awesome….just awesome."
I guess you should introduce yourself and band and also if your art has changed now that you've doubled the number of cats at your house.   If you had to pick alter egos for everyone, what would they be?
As far as Chrome Drones is concerned I would say I'm lead creative director/ producer. But that's not to say I don't have a lot of help. Ever since we started producing original material for this project Matt Schumacher has been right next to me in the studio. I need Damon to hone in my ideas and approach the business aspects. Pete and Blake just crush their instruments, so its easy to send them ideas and get more parts to fill the gaps. All in all it's a very motivated team, without any of the drama that stems from a lot of band situations. When we started this project there where no expectations or underlying preconceptions. It was just a fun improv DJ set really. Over the years of working in the Denver music scene I've had the honor of working with some of the best musicians around. However, there are only a handful of them that I feel 100% comfortable just doing unrehearsed jam sessions with. I was approached by Denver Disco to do a Signal Path disco show, but due to contractual obligations we couldn't call it Signal Path. So instead I just reached out to some of my friends to form the best disco band I could think of. It's one of the most fun projects I've ever worked on. Every time we play I get this overwhelming feeling of joy and humbleness that the rest of these guys will come out and jam with me. My art is constantly evolving cats or not, but a little extra pussy never hurt.
Matt Shumacher - Panda Burger - "Shoe" is one of my favorite people in life. He'll try anything at least once, probably even a panda burger. Depending on the month and our tour schedule, there's a good chance I'll sleep next to him more than my girlfriend. On this project he and I have been getting together as a production team and it's really got a nice flow. It's been amazing to just bounce ideas around and it's sped up my workflow exponentially.
Damon Metzner - Day Man - "Damo" defeated "The Night Man" to become champion of the sun. He now runs a couple schools dedicated to teaching karate and friendship to everyone. Seriously though we couldn't do this without him. He handles all of the stuff that I would never get done. Plus, he puts up with me doing crazy weird long builds.
Pete Wall - Dr Far Out - Pete is a mad scientist of mind bending jazz. He can weave you into hypnotic trance of smooth sexy sax leads. Then serenade you with some tasty jazz flute. I still haven't figured out what instrument this guy can't play.
Blake Mobley - Rage Face - Blake just shreds plain and simple. I had never played with Blake before our first show, but was blown away at how fast he adapted to the sound. I can always tell when he's getting into it, cause he'll look over and put his rage face on.
4) What do you think we should put on our backstage rider for the next few shows?
1 bottle Jameson, 2 cases PBR, 4 reasonably priced remote controlled helicopters (Drones), Nerf guns to shoot down the drones and 1 pair of socks.
5) Multiple choice question:

Is slapping the bag:
A) a sexual reference
B) a wine drinking game
C) a boxing training technique

(Don't urban dictionary, fucker)
D) All of the above. I've slapped many of bag in my day
Do you ever regret changing the name of the band to Chrome Drones from Erriot Ripp?
Nope, although Chrome Drones doesn't hold a candle in the humor department. I think it better suits the music as a whole.
Want to get drinks later?
Yea!! Drinks!