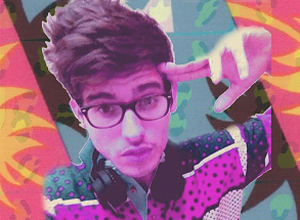 The Untz has prepared a special interview with Miami’s Kairo Gudino, a.k.a. CHALK, surrounding his recent achievements as an electronic music producer. His musical styles range from minimal tech to acid house, nu-disco funk, tropical erotica and more. In recent years he has become a local crowd favorite and has performed all over the city of Miami, including popular venues like The Electric Pickle, Wall, Purdy Lounge and Kill Your Idol. Find out what makes this newcomer so worth mentioning, how he pursues his talents and what he has in store for his fans in 2013!

You're new to the scene, tell us something about yourself. Name, age, where you are from, hobbies etc. Anything you want your fans to know about Miami's hidden music gem, CHALK.

My name is Kairo, I’m 19 years old. I was born in Caracas,Venezuela. I like letting my ideas transform into an audio form. Buying wax, traveling.

Do you still work with Josh or is CHALK a solo project now?

Josh is now pursuing his own experimental beat project called 2isnot1. It’s dope, you should check it out. We started out making trip-hop and downtempo things but as soon as I moved to South Beach about a year ago and DJing more, I was way more motivated to pursue dance tunes.

What was the first track you ever produced by yourself?

I honestly forgot. It’s been close to 4 years now that I've been producing electronic music so I've come to loose count of numerous of unfinished loops or tracks that I never wrote lyrics too, just sitting in my iTunes.

How have your production skills changed since then?

I definitely have gone through a change in the pass 6 months. I've completely become an Abelton-head compared to using FL Studio or Reason. My tracks feel warmer now.

What equipment do you use? What’s your favorite thing to do with it?

I have the usual Midi's layin’ around (MPD32, MPK25, APC40) but honestly my favorite equipment would have to be my Technic1200 set up into a Xone:92 mixer + recent vinyl finds = Heaven. The looping feature on that thing is ridiculous. Also, it has hundreds of reverb effects so you kinda get the idea.

Describe your music in three words.


Give us a rundown of a typical night out in Miami for you.

Roll up, hit the pickle, drop out.

Name a few good shows you’ve been to recently that have inspired you to try something new with your music.

I’ll give you my top 3 of 2013 — all in the pass month! Jimmy Edgar, Seth Troxler (after-hours vinyl set) and last but not least, this one actually has to be my favorite thus far, watching SVENGALISGHOST put on a live acid performance alongside JOE LENTINI vs JUAN TELWAY. Omgggggg shout out to home girl Lorraine for putting that together.

Your style is very different from a lot of music coming out of South Florida, how did you develop your sound? Any particular artists hold a strong influence over you?

I have a lot of influences but musically I could say thanks to Larry Levan, Thomas Bangalter [of Daft Punk], Gino Soccio, Mr. Oizo, anything from Traxx Records, Adonis, DJ Harvey, Spaceghostpurrp and my homies Metro Zu. Just to name a few.

What can we find on your iPod? What was the last track you were listening to?

Last track was this loop I've been working on, before that I think some Tom Trago was bumpin’.

[Laughs] That was a joke that quickly caught on while I was living on South Beach for a year. Every day felt like summer, then I made a track called “Tropical Boy.”

Where do you buy your clothes?

I like to thrift [shop]. Only reason being is I deeply believe that some clothes you just don't find from ‘luck’ but it’s a connection established before this life. Like 45% of my clothes I use to own in a pass life.

How did you get involved with Dirtybird Records?

My DJ friend t.k.Lo went on Holy Ship this year with a glorified reputation from last year’s Holy Ship, in which he brought his own set up and turned the cafeteria of the ship into a 100 person dance party. Ironically enough, Claude VonStroke and Justin Martin named him ‘the hamburger DJ’ and remembered him as soon as he got on the boat this year. My friend already had a couple copies of my demos so he slipped one to Claude. A day later he tells my friend he wants to sign five of my tracks. Next thing you know, I'm emailing him.

So what can the music industry expect from CHALK in 2013?