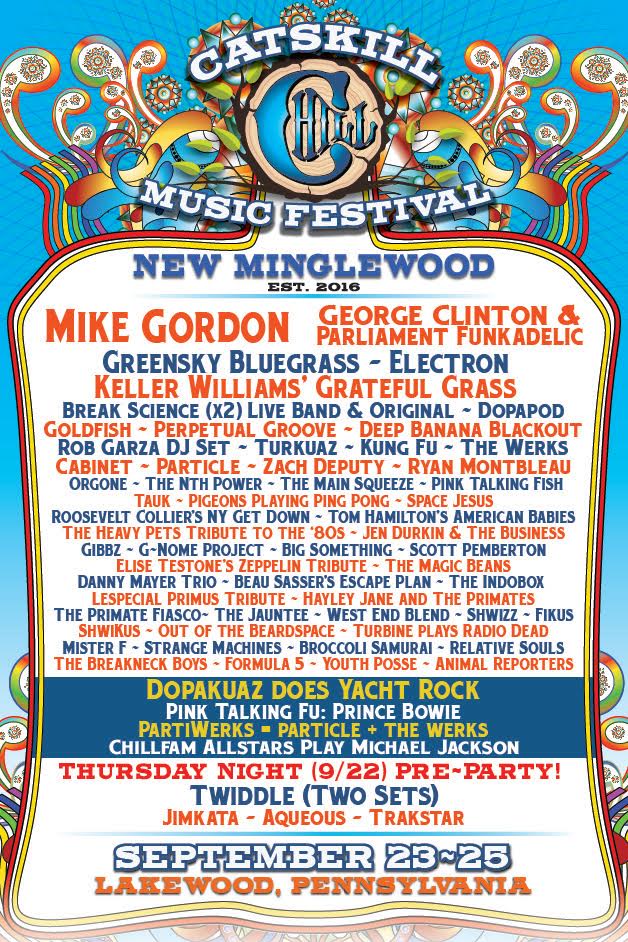 There is no better festival to end your season then Catskill Chill. Landing on the second to last weekend in September we get to close out our year with this unmissable party. Last year was the Farewell to Minglewood, the longtime home to Catskill; this year we are welcoming the New Minglewood (in Lakewood, Pennsylvania) and it'll be one hell of celebration. We will be christening the new grounds in the best way possible, a 4-day dance party at a private summer camp. Keeping with the similar vibes as Catskill's original home we have a wide variety of assorted grooves to enjoy.

On the electronic side of things is Thievery Corporation's Rob Garza doing a DJ set, the smooth funky soul of Gibbz and the King of Weird Bass himself, Space Jesus. There is such a wide range of genres it's almost overwhelming.

Catskill is known for its impressive tribute sets and this year is no different. The Heavy Pets will be doing a tribute to the 80's. When is an 80's tribute ever out of style? Pink Talking Fish is leading the charge in terms of tribute bands. They'll be doing a monstrous set of Pink Floyd, Talking Heads and Phish tunes, all intertwined and jammed out to the fullest extent. Lespecial will be paying homage to the bass masters Les Claypool and Primus. While Elise Testone nods her head to Led Zeppelin. Keller Williams will be performing a Grateful Grass set, performing Grateful Dead tunes for all our eardrums to rejoice.

Continuing the tradition of offering a unique twist with returning artists, Dopapod and Turkuaz will join forces for Dopakuaz Does Yacht Rock, Pink Taking Fish and Kung Fu will take on the music of Prince and David Bowie, while Particle and The Werks come together as PartiWerks. The weekend will also feature a Chillfam Allstars Thriller Tribute.

As if there wasn’t enough awesome news in this announcement, for the first time ever, there will be an onsite pre-party Thursday night featuring two sets from Twiddle, along with Jimkata, Aqueous and TRAKSTAR.

Adding even more fuel to the fire is the 2016 VIP Package. It includes use of an indoor/outdoor VIP and artist swimming pool and jacuzzi, and intimate VIP BBQ sets with private performances by Eric Krasno Band and Michelangelo’s Sunday Sauce featuring Nick Cassarino, Roosevelt Collier, Steve Molitz, Nate Edgar, and Michelangelo Carubba. Access the pre-party, exclusive view area at the main stage, VIP Lounge Cabin, private BBQ, VIP parking/bathrooms/entrance, golf cart escort service, t-shirt/poster and VIP laminate. If you're going to end your festival season right, you might as well go out with a bang. Catskill Chill really pulled out all the stops this year, with the lineup, the location, the pre-party and now this amazing VIP Upgrade, it’s going to be one for the record books.

Catskill Chill is unlike any other festival. The setting is unbeatable and completely exclusive to the Chill. A private summer camp in Lakewood, PA adorned with cabins that can be rented, acres of land, a gorgeous lakefront, paved pathways, covered stage facilities as well as an outdoor main stage for attendees to enjoy music under the stars. Not to mention, indoor and outdoor spaces for yoga, art and wellness workshops, free parking and camping and a communal nightly bonfire. What better way to celebrate the end of the festival season then to rejoice in the open air dancing til sunrise on private land around a fire.

Head to catskillchill.com to snag your tickets!