Published: September 6, 2012
In a crowded world of commercial bass music, two brave funketeers are bringing some bounce back to the game. VibeSquaD and Opiuo tonight embark on their Beatport sponsored fall American tour with a kickoff show at the prestigious Boulder Theater! Throughout the tour, they will be joined in select cities by Pretty Lights Music roster member SuperVision and the skyrocketing heRobust (seriously, if you're not on board with Hayden Kramer by now, you've been living under a very dull, soundproof rock). 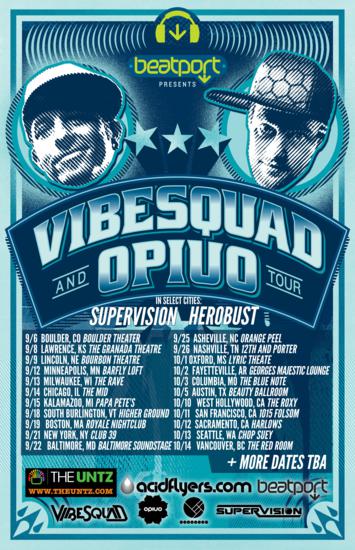 As if the mere presence of these two bass gods atop the bill wasn't enough, the pair will be sharing the stage for joint performances, and a collaborative studio release will be recorded while they road-dog it across the country.  Additionally, tour sponsor Beatport will record live content and release it via their website, as well as offer special VIP packages that allow fans to kick it with VibeSquaD and Opiuo and get some custom swag. Additional tour promotion will be provided by us here at The Untz, state of the art BASS providers – PK Sound, as well as from multi-media experts, Acid Flyers. If you're not planning on attending at least one of these shows, you just don't care what you're pouring into your earholes--it's as simple as that.

VibeSquaD
Lying somewhere in the space between the wild energies of funky, psychedelic rock and the deep grooves of dance music’s love affair with bass, Denver, Colorado DJ/producer Vibesquad excels at providing a signature style that has carved him a unique niche as a veteran creative performer. Born Aaron Holstein, his deep background as an instrumentalist comes into play as a natural understanding of how to harness and release the strength of crowd-friendly melodies and breaks buoyed with low-end power.

Opiuo
Ever wanted some extra funk in your life? What about some warm syrupy bass sauce to compliment your daily adventure? Well now you can have all that and more within the perfectly crafted sonic soundscape that is the DJ/producer known as Opiuo. A Kiwi who now calls Australia home, Opiuo is a chief sufferer of intense musical addiction, spending every spare second creating audible treats and selling out venues throughout the world. Featuring pop-driven melodies laid over atmospheric grooves, the drummer turned producer’s sounds are grounded by an inventive, glitch-driven and bass heavy low-end that has garnered masses of fans around the world.