It starts off in a dark corner in Brooklyn. Seedy alleyways segregating housing projects and dilapidated brownstones. Coming up in the hood, how do you say no to stashing rolls of Benjamins slinging keys by the three. That’s the trap, and the minimalist electro/hip-hop that’s sending dubstep to the boneyard is the score. What we lose is the poetry that made Aesop Rock, Atmosphere, Tupac, and Def Jam great, but 23-year-old trap star Harry Rodrigues, better known as Baauer, compensates for his lack of timelessness with absolute relativity. America’s greatest characteristic has always been collective. Italian-American, Mexican-American, fusion music, Japanese-inspired American food; we are finally embracing our trans-cultural identity, and this nerdy white boy from Brooklyn embraces these roots and the present face of music to give us a crockpot of genres on his tracks. The two decades his life spans come through in his tracks, paying full homage to the tunes that inspired him: 90s break beats, hip-hop bass, Grandmaster flash crossfades, and militant rhythms reminiscent of the anxiety, fear, and activism felt during George Bush’s years in office.
It’s a new year, for us and music, and a new dawn for EDM. After cementing his name in the minds of every neon-covered candy kid and aspiring artist/intellectuals geared and tuned into the influx of chaotic, jazz/hip-hop inspired EDM with the 2012 trap anthem “Harlem Shake,” rumor has it we are soon to be blasted Baauer’s new track "Slip" slated to drop on thisisluckyme.com soon. Be sure to catch him on tour this year as he crosses the U.S. It’s refreshing to see someone smile on stage behind their laptop and fame.

And with the kickoff of the Big League Tour with Just Blaze comes a brand new collab "Higher," which has surpassed 200K plays on SoundCloud in half a week. Pretty impressive. 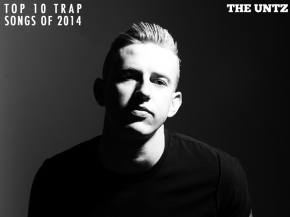