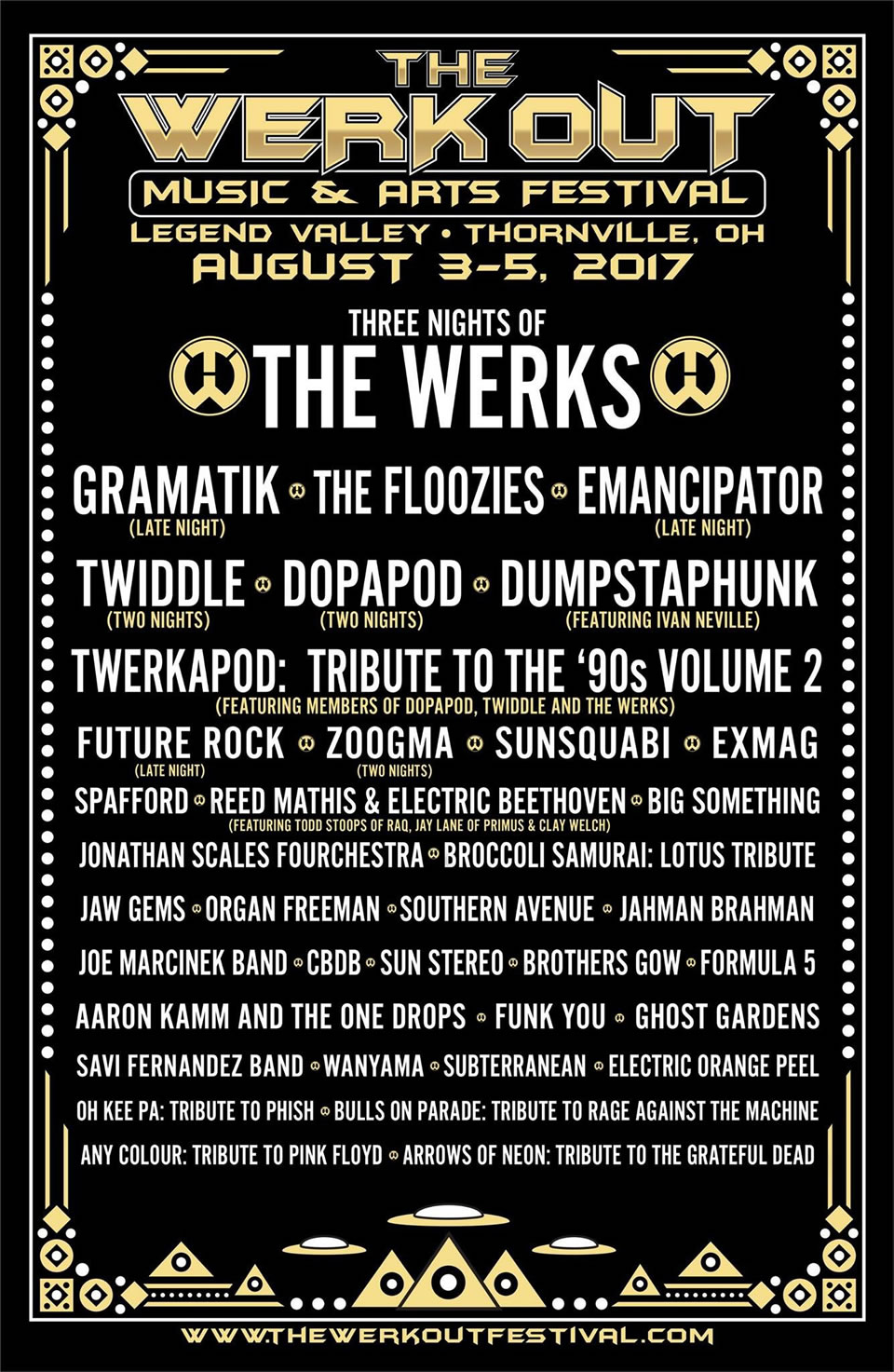 It seems that festivals nowadays come and go so quickly. In recent years, we’ve seen large-scale festivals with top tier lineups and powerful corporate backers drop like flies, even after many years of successful editions. Fortunately enough, smaller and mid-level festivals, especially those started by bands, have been thriving.

Midwest music fans look forward to The Werk Out Music & Arts Festival every year. Jam favorites The Werks always make sure to bring out a stellar lineup of talented musicians, assist in curating tantalizing art exhibits and live artists, and always know how to help keep the vibe as close-knit and family like as possible. The hallowed grounds of Legend Valley in Thornville, Ohio have witnessed many amazing Werk Outs ever since the festival moved there in 2012.

That vibe is what has helped The Werk Out keep going into year eight, according to drummer and festival manager Rob Chafin.

The success of The Werk Out has also come on the back of The Werks continuously rising in popularity ever since their inception in 2005. As the band’s popularity increases, the more opportunities they have to perform with and befriend bigger and bigger acts.

“We’ve been lucky to bring some of our good friends to our party each year,” says Chafin. 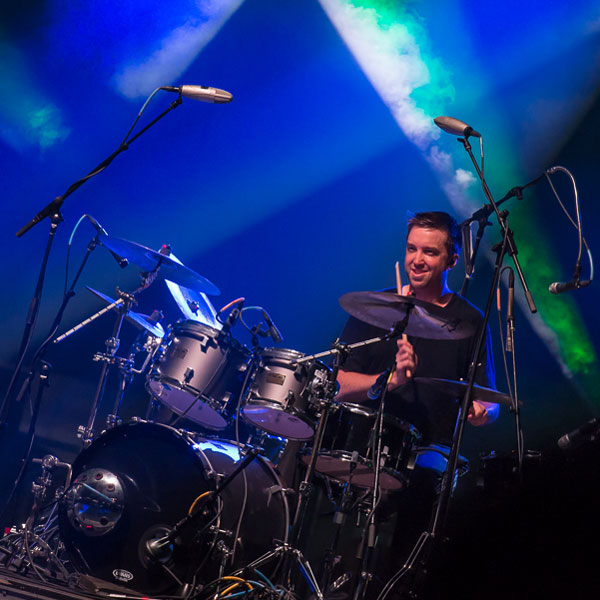 This year, the friends they’re bringing out are noticeably on the more electronic side.

“Every year we try to switch up the theme” says Chafin. “Our fans give requests each year and we try to give them what they want. We’ve had funk heavy years in the past and his year we wanted to emphasis more electronic based acts, but also keep up with artists that also play their instruments live.”

That’s extremely obvious when you see huge acts like Gramatik coming to play their first Werk Out, along with The Floozies and Emancipator both coming back for their second appearance.

When it comes to three nights of The Werks, this year is probably the most exciting when it comes to the anticipation of their setlists. Their 2015 LP Inside A Dream was released after that year’s Werk Out, and their newest released Magic earlier this year. We can always expect old favorites from the band when they come to Legend Valley, but it will be amazing to hear some of their newer tunes being played in the bowl of the venue’s beautiful landscape.

Their alter ego Werktronic will also be making an appearance on Friday night. Similar to Tractorbeam sets from The Disco Biscuits, these sets are more electronic music influenced, with many originals given an electronic music twist, along with a couple covers. The Winter Werk Out saw covers of Daft Punk’s “Robot Rock” and “Get Lucky,” along with Darude’s “Sandstorm.” The band also twisted old tunes like “Heading South,” “Burnin’ Groove” and “Rollin’.” Chafin says that he loves playing those older favorites during Werktronic sets, because “no one would really expect to hear those song twisted like we do.” 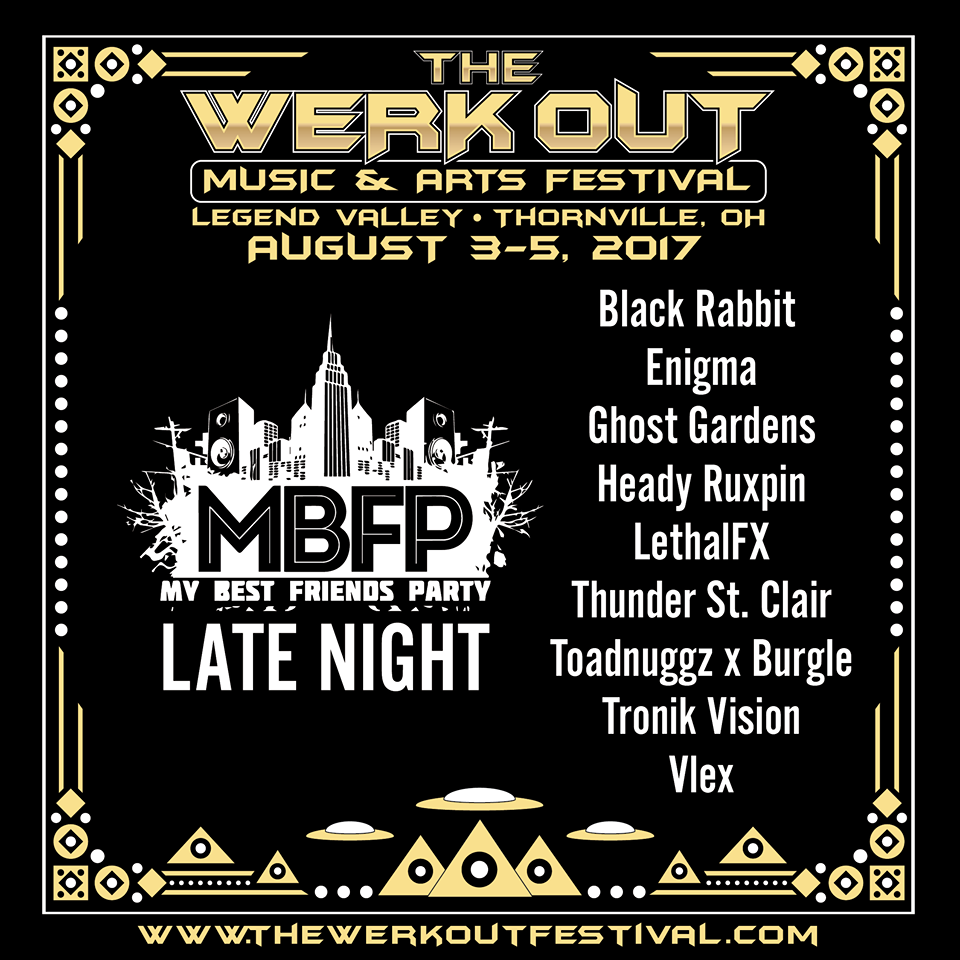 It also wouldn’t be The Werk Out without a couple staples coming back for more! Even though it’s only their second year, Twiddle has already become enough of a favorite to have them perform two nights back to back years. The ever so jazzy and groovy Dopapod are also performing two nights at their impressive fifth year in a row! They’re tied for second place (obviously not including The Werks) with jamtronica quartet Zoogma! It’s also nice to see the guys in Future Rock back on the bill. They haven’t returned since 2014, and their livetronica style fits in perfectly for the theme of their third year.

This year is also special because it will also feature a couple music legends. Funk music icon Ivan Neville will be bringing the funk with Dumpstaphunk, while former Primus and Furthur drummer Jay Lane will be holding down the percussion battery for Reed Mathis & Electric Beethoven! Though not yet a legend, Werk Out legend and best friend of The Werks Todd Stoops will also be performing with Electric Beethoven. It’s a given that Stoops will be making multiple appearances throughout the festival. 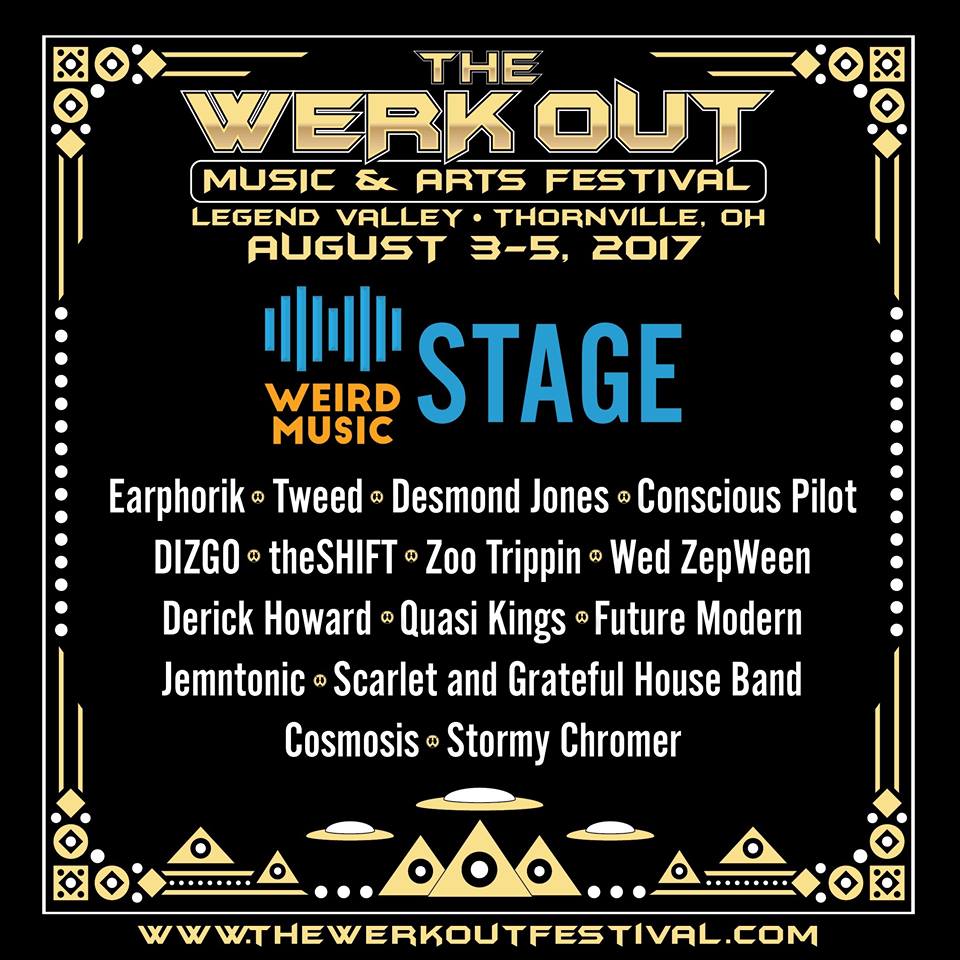 Another addition to The Werk Out this year is a heavy emphasis on tribute sets. Chafin says that each year, their fans constantly ask for tribute acts each year, and many of these acts will be some of the first bands that festival goers hear each day. Athens, Ohio’s Any Colour puts on one of the best Pink Floyd tributes around, while Oh Kee Pa and their Phish tribute features Dino Dimitrouleas on bass. Also back again is Twerkapod’s Tribute to the ‘90s. Last year’s set was full of so many insane surprises, and the anticipation of members of Dopapod, Twiddle and The Werks performing even more ‘90s favorites is almost too much to handle.

Every act on the bill deserves to be heard, but there are a few that really deserve your attention, Some are Ohio and Midwest favorites, some are making their return to The Werk Out, and some are performing for their first time. Trust me, you won’t be disappointed in these 10 amazing acts.

Coming all the way from Asheville, NC for their first Werk Out, Jonathan Scales and crew will provide some of the most unique sounds heard throughout the festival. The group fuses groovy jazz basslines steel pan drum melodies from Scales himself to create a reggae sound unlike any other. Though the music may seem more avant garde than structured, those who take the time to listen closely will truly understand the beautiful complexity of the group’s tunes.

9. Bulls on Parade: Tribute to Rage Against the Machine

Tribute acts come and go, but it is always amazing to see some of these acts with talents so point with the artists they are paying tribute to. The Athens, Ohio outfit is already a supergroup within a supergroup. The instrumentalists makeup the group Boomslang, which features members of Athenian favorites Manitoa and Hellnaw, with vocalist Emcee Schwartz of the hip-hop group Dysfunktional Family rounding things out to create the full Rage experience. All of the instrumentalists are extremely gifted in their own right, but Schwartz’s unique voice and rapid fast flow is so on point with that of Zack de la Rocha. Rob Chafin learned to “Wake up and Rage” from times performing at Nelson Ledges Quarry Park, so in that spirit, we’ll all be waking up and raging come Saturday afternoon.

One of the many prides of the Dayton, OH jam scene, Subterranean blends some of the best dynamics of funk, jazz and jam to create infectious grooves you can’t help but dance to. The quartet also includes many familiar faces, with founding member of The Werks Chuckie Love on bass, as well as The Maji’s Rob Brockman on percussion. A staple of many Midwest jam festivals, it’s also the group’s fourth time performing at The Werk Out, so there are definitely many reasons this talented group keeps coming back.

7. Aaron Kamm and the One Drops

Even though they are another Werk Out rookie, Aaron Kamm and the One Drops definitely have the songwriting and performance chops to get them invited to various great festivals. Over the last two years, the trio has been billed alongside Michael Franti & Spearhead, The Floozies, Dark Star Orchestra, LCD Soundsystem, and Big Gigantic. Fronted by the soulful Aaron Kamm, the high-energy trio fuses almost every sound you can think of, from roots, reggae, soul, jam, blues, and some good old fashioned rock n’ roll.

Returning for their second Werk Out in a row, Alabama’s CBDB has really started to grow into their own in an extremely successful way. The soulful, groovy quintet have begun to really get the recognition that they deserve, with 2017 performances at Okeechobee, Electric Forest, and Sweet Water 420 Fest, and Summer Camp. The group is just downright fun, and their sound has the ability to resonate across multiple musical styles and decades.

It might be a sin to put more than one tribute act on a Top 10, but since Broccoli Samurai has played seven out of eight Werk Outs, then I’m sure as hell going to put them on. Hell, as a fellow Ohioan, I’m pretty proud of this quartet. Another pride of the Ohio jam scene, this jamtronica outfit has been ripping up stages all over the country the last few years. Their contagious keyboard driven grooves have earned them performances at Suwanee Hullaween, Buffalove, Wild Woods and Floyd Fest. They’ve even covered and performed on the same stage as Lotus many times.

Though they have unfortunately flown under the “mainstream jam” radar ever since their inception, Columbus, OH’s Electric Orange Peel really deserves to be heard. With quick tempo and genre changes, along with expert performance skills, I’ve considered this quartet as the next Umphrey’s McGee. They’ve even battled their way to earning three Summer Camp appearances! Don’t sleep on these guys, because they will definitely pop here soon!

Though currently based in Asheville, NC, Jahman Brahman originally called Columbus their home. They earned their chops in the great state of Ohio, and now they are back to perform at their fifth Werk Out; their first since 2014. If you like the “phusion” flow of Phish, then you’ll definitely love this quintnet. They’re another gifted group that combines the beautiful bits of everything from funk, to jazz, to jam, to electronica, and everything in between.

Another act back for their second Werk Out in a row, this North Carolina sextet brings a ton of power to their live show. Take George Clinton’s funk, the shredding of Umphrey’s, and Lotus’s electronica, and you have Big Something! These guys are definitely an act that can barely be described in words, because they’re sound will change three times by the end of a sentence. You can count on these dudes to crush it every time they take the stage, and you can gurantee Something Big to come out every song they play.

Though one might assume it from a first listen, Exmag is definitely not your run in the mill EDM act. The trio (along with frequent collaborator Gramatik) brings a wonderful organic flavor to their electronic music. Eric Mendelson’s guitar licks add both a funky groove and soulful swoon to their electronic beats, while their alluring synthesizer sounds are nothing short of baby making music. Whether they play in the sunshine or while the moon is glowing, Exmag is sure to bring out the sexy side of you.

The Werk Out is Ohio’s premier party and it is coming up fast! GA and VIP tickets can be purchased at thewerkout.eventbrite.com.