Imagine being immersed in the classic arts and Creole culture of New Orleans. Now imagine the fun, free-loving vibes of a music festival. When the two of these atmospheres collide, you’re given BUKU Music + Art Project—and another remarkable year is officially in the books. The grounds are tucked away in the warehouse district just a short walk from the French Quarter. Not only did it completely sell out again, but further there were a few surprises that proved just how magic the event can be.

Day one’s schedule was stacked full of promising performances, beginning with G Jones in the Float Den. This stage is actually located where Mardi Gras floats are stored when not in use. Greg Jones brought an incredibly heavy, yet diverse set as people filtered in and examined the strange venue. The floats are on display with different colored lights, which line the entire warehouse.

Break Science kicked the party off in the Ballroom not long after, playing their first of many sets planned for the weekend. Consisting of Borahm Lee and Adam Deitch, the duo are both a part of the Pretty Lights Music record label, and further are also members of the Pretty Lights Analog Future Band. Lee has an ever-growing stage presence that could especially be felt over the weekend. Deitch, the man behind the beats and breaks, appeared as confident as ever.

Over at the Back Ally stage, Tokimonsta’s intimate set kept people swaying as the sun finally set. She used an innovative blend of dance and pop music, avoiding genre classifications by implementing them all. She also recently launched a new album, Fovere, which has received tons of deserving praise. Tokimonsta was followed by Jai Wolf, who ensured the momentum at the Back Ally pressed onward, full speed ahead.

The Power Plant stage is great because there isn’t a bad view in the entire place—of course, that’s if you don’t mind saying, “excuse me” to navigate a huge crowd like the one that could be seen during Above & Beyond. Even the VIP lounge on S.S. BUKU seemed pretty full, but never uncomfortable. Inside the giant riverboat there is an exclusive VIP venue, which hosted acts like Vibe Street, The Funk Hunters, Illenium, and Sweater Beats throughout the day.

After a captivating headline set from Kid Cudi, the night was showing absolutely no signs of fatigue. A funk party took over the Float Den when GRiZ hit the stage. Wielding his saxophone and joined by label-mate Muzzy Bear with the guitar accompaniment, GRiZ kept the crowd on their toes for the entire set. A guest appearance from Russ Liquid was just a glimpse of what the night had in store.

The live collaborations continued as night one officially came to a close. Not only did festival-goers flood the streets and bars of New Orleans, but further there were official BUKU LATE sets all across the city. At the Republic NOLA, BAAUR, Mija, Sweater Beats and more were slotted, while Matthew Dear, Thugfucker and more raided the Dragon’s Den. A special BUKU ALLSTARS set took place at the Joy Theater, where Adam Deitch hosted an elite cast of musicians for a once-in-a-lifetime performance. Along with the other half of Break Science, Borahm Lee, the lineup included other members of the Pretty Lights Live Band like Eric “Benny” Bloom of Lettuce, Eric Krasno of Soulive and Eric Vogel of Big Sam’s Funky Nation. Both Russ Liquid and GRiZ made it in time to join in on the festivities, along with Mystikal himself—yes, they even played “Shake Ya Ass.” After the music was wrapped up, it was time for some much needed sleep before tackling day two.

A friend told me about this tiny Pretty Lights Family crawfish boil in the early afternoon, where there would be fun times and good people at a place called the Hi-Ho Lounge. Crawfish, music and friends in NOLA—seems like a no-brainer, right? Not long after arriving, Vibe Street came on stage in one of the most personal settings you could imagine. Considering that even press were restricted from viewing his set at BUKU, it’s inspiring to see artists who care about their fans and their music enough to do a little extra work while spreading their art. Around a half of an hour into his set, Vibe Street announced that everyone should, “Check instagram.”

Derek Vincent Smith, or known more famously as Pretty Lights, had posted a picture of himself in a parking lot. He only left it on for a short while, but there was a pin attached with his location. It was clear that another one of his #PLpopup sets was going to happen, similar to way it did in Las Vegas on his NYE run.

After rushing to the actual festival, I could feel the anticipation building heavily toward the night. The Float Den was stuffed full of energy throughout the day, where acts such as NGHTMRE, What So Not, Feed Me and Yellow Claw kept the bass blasting. A number of indie and hip-hop acts were scattered throughout the day, which all seemed to fly by until it was time for the Pretty Lights Live Band to invade the Power Plant stage.

Everything about the band sounded great—from their flair, to their chemistry—and the main stage at BUKU was a perfect environment to watch them perform together. A couple of new tracks and jams were thrown into the mix, amongst fan favorites and popular classics. When Pretty Lights set ended after an hour and a half, crowds dispersed toward Datsik in the Float Den, who was followed by veteran act Nero. In the ballroom, a special B2B set featuring Cashmere Cat and Trippy Turtle dished out some heartfelt tunes along their roller coaster of emotions and various styles.

While the end of day two brought the entire festival to a close, there were still BUKU Late Sets for those in need of more music and positive vibes. At the Republic NOLA, there was an official MAD DECENT BUKU PARTY that featured Yellow Claw, NGHTMRE and Louis the Child. While J. Phlip and Mark Starr journeyed to the Dragon’s Den. 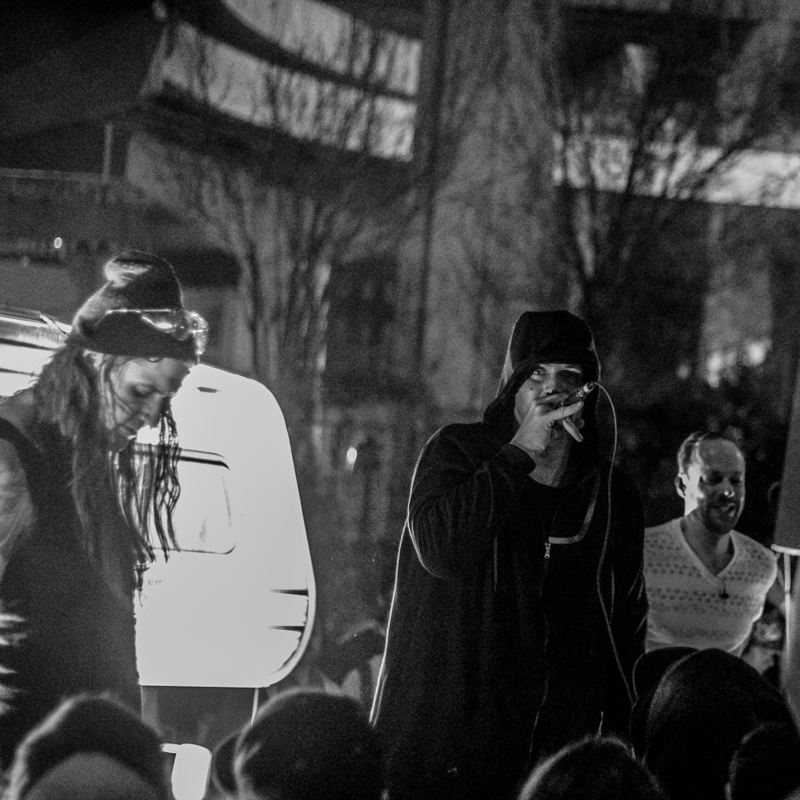 Immediately after leaving the stage earlier in the night, however, Pretty Lights headed over to his semi-secret set where he proved that a couple of tables and headlights at an underpass are all he needs to get down and have fun. Along with Mux Mool playing the finger drums and world renowned DJ Chris Karns on the turntable, Smith operated an old-school synthesizer with a mess of different colored cords. He would patch these different ways into the machine, creating variations in the droning, synthesized sound produced by the equipment. The sound has a distinct mix of hip-hop and electronic elements—the familiar boom/bap feel stays consistent, along with the scratches and unnatural sounds of the electronic gear.

The Joy Theater was host to another special after-party on night two, when Pretty Lights took the stage yet again to unveil his fresh ANALOGY event. Following sets from Supervision and Break Science, the same trio from the secret set found their way to the stage. A laser cage from the ceiling pointing downward was installed for the occasion, which was like the final cherry on top to experiencing Smith in a 900-person venue. The trio was then joined by Lee and Deitch of Break Science, who also operated only analog equipment. Before long, three members of the Preservation Hall Jazz Band’s horn section appeared. Their brass and few percussion additions were the only “real” instruments in use, which all together created a sound unlike anything I’ve ever heard—shit got weird, in all the right ways.

The sun was coming up when the jam session ended, but sleep seemed to be the last thing on everyone’s mind. The smiles on most faces, especially the fun and excitement Pres Hall Horns showed while on stage, was only a tiny indicator of how much magic was truly in the air this year BUKU Music & Arts Festival. If you haven’t been, NOLA is the perfect place to experience your passion for music because everyone shares that passion.