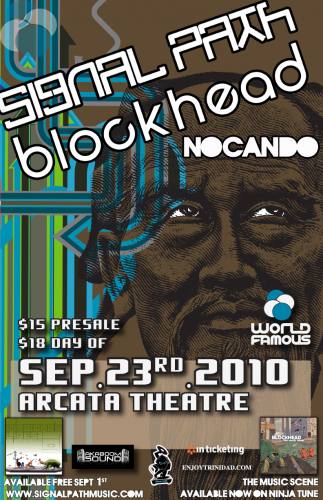 We're so thrilled to welcome back both Signal Path And Blockhead to Arcata and to have NOCANDO here for the first time.

Tickets available at the WORKS and through inticketing here:

Signal Path ( Denver/Portland ), is a duo comprised of Ryan Burnett: Guitar/Production and Damon Metzner: Acoustic Drums. Signal Path bends musical genres and deep melodic ideas around a core of unrelenting rhythm and massive low-end. They create a depth and intricacy of sound that become more commanding every time it’s heard, and by blending live instrumentation into their production they create a live experience that is as beautiful as it is intense.

Blockhead (NY) = Anthony « Tony » Simon, who produces his own unique style of hip-hop down-tempo excellence. His sound has been described as exquisite, emotional instrumental hip hop that hits hard.When not working on his new album he has been providing production for Aesop Rock, DJ Signify, Joanna Erdos and many more, plus remixes for Yameen and Chin Chin, amonst others.

NOCANDO (LA), With almost a decade of active duty in the L.A. beat scene and plenty of battle trophies under his belt, Nocando has earned the respect of peers, veterans and newcomers alike. Unpredictable and vivacious, Nocando will light any night and every crowd with his clever words and dynamic delivery style. With the continued convergence of the hip hop and electronic music communities in Los Angeles and around the world, Nocando is poised to shout his drops from the peak of the movement all the way to the vibrating dance floor of the underground.