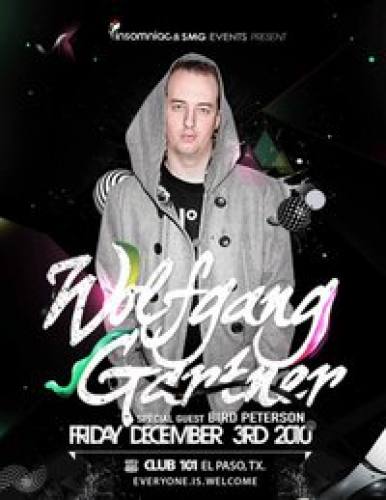 SMG Events and Insomniac are proud to present one of the hottest electro producers in demand WOLFGANG GARTNER on Friday December 3, 2010 at Club 101 in El Paso, Texas with special guest BIRD PETERSON.

In the often serious world of dance music, it’s good to see somebody still having a bit of fun. Meet Wolfgang Gartner, or as he's known to his parents; Joey Youngman. At first glance the name Wolfgang Gartner is a fairly recent blip... on dance music’s collective radar, but dig a little deeper and you’ll discover a robust discography, amassed by a seasoned veteran of the music industry.

Currently residing in Austin, Texas, this 26-year-old California transplant has been producing dance music since he was 11 years old. While most kids were playing Nintendo and after-school sports, Youngman was syncing a drum machine to a keyboard and teaching himself to make tracks. His career didn’t hit center stage until 2003 however, when after a decade of pounding on the industry’s door he landed his first big break and began putting out records.

The early years of Youngman’s discography boasted releases and remixes on dozens of respected house labels like Tango, Om Records, Naked Music, Doubledown, and his own imprints; Fetish Recordings & Jackin Tracks. He donned a slew of production aliases including Mario Fabriani, White Collar Criminals, Frequent Fliers, and a few other colorful guises that helped to spice up an exceedingly frequent release schedule.

In 2004, Youngman signed onto the esteemed Blue Collar Entertainment roster and started focusing more time on his other passion: DJ’ing. The move sparked a series of global tours and increased his exposure to audiences around the world. To date, Joey Youngman has performed on every continent. From Japan to South Africa, Russia, Ibiza, and everywhere in between, the air miles have stacked up along-side his innate ability to work a dancefloor.

2007 marked a major step in Youngman’s career with the introduction of his new moniker: Wolfgang Gartner. The new name was created to explore a new sound, without feeling confined to the musical boundaries of his previous projects. “I was getting bored with house, with that whole sound,” he says. “I basically hadn’t evolved musically since the late 90's and had been rehashing the same ideas over and over. Something just snapped and I decided it was time for a complete change.”

It was apparent from the first Wolfgang Gartner release that Youngman was onto something big. In a period of less than a year and a half, Wolfgang Gartner had landed 6 top-10 singles on Beatport.com’s sales chart, a Pete Tong “essential new tune of the week” on BBC’s Radio 1, three video game licenses, over 50,000 Beatport downloads, and a plethora of DJ support and accolades within the industry. It was early 2008 when Youngman made the decision to pursue the Wolfgang Gartner project full-time. “It’s so hard to do 2 things really well at the same time,” he says. “I realized that I had to pick something and stick to it. So I decided that this new style is the direction I want to go, and to focus all my time and energy on Wolfgang Gartner.”