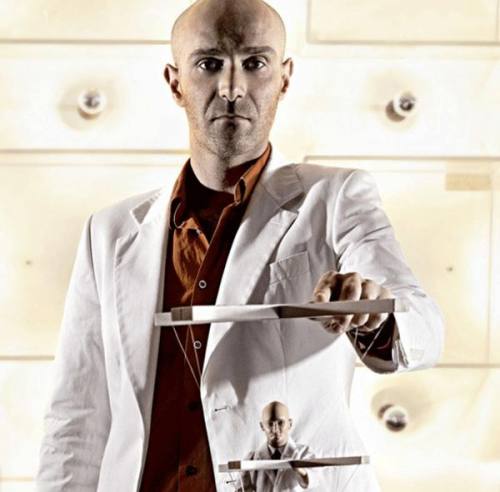 
Vitalic, returns to SF for another mind blowing session that you won't want to miss! Known as a disco visionary responsible for shaping the sound of modern-day electronic music, The French programmer/multi-instrumentalist blends electro, techno, and house — as well as elements of classical, rock, Italo-disco, and '70s electronic music — into a sound that recalls the work of fellow countrymen Daft Punk and Air, but has its own hard-edged playfulness.


Vitalic is the alter ego of Pascal Arbez, who, as a child and young adult, played trombone, but became fascinated with dance music when he heard Daft Punk in the mid-'90s. After sending a demo to International DJ Gigolo, the label released Vitalic's Poney EP in 2001. The EP's expansive yet hard-hitting sound made its three tracks staples in sets by DJs as varied as Aphex Twin, Princess Superstar, and 2 Many DJ's. However, despite some collaborations and remixes, Arbez took a while to release any new Vitalic material. The Fanfares EP arrived late in 2004, signaling a heavier, less atmospheric bent to Arbez's work than the Poney EP; spring 2005 saw the release of the single My Friend Dario, by far the poppiest Vitalic track yet. Most of Vitalic's key singles and tracks were collected on the long-awaited debut album OK Cowboy (the title of which alluded to Vitalic's maverick stance and Arbez's preference to live in the French countryside), which arrived in Europe later that spring and was released in the U.S. that summer. Early in 2007, the mix album The Sound of Citizen — which included tracks by Arbez's inspirations as well as artists on the Citizen roster — was released. Late that year V Live arrived. Disco was a strong influence on 2009's Disco Terminateur EP and the single "Your Disco Song," both of which arrived before his second full-length, Flashmob, appeared that fall. Flashmob is Vitalic’s poetic interpretation of disco, but not the bell-bottomed or Balearic kind – more disco as a sensibility, a personal approach. These new tracks have been called “ballsy disco” in France, Pascal says, and you can see why. Listening to the exquisite high-energy bliss-pop and full-blooded new-beat of Flashmob is like being  intoxicated and kissed, deeply, by a beautiful, stubbly stranger. Manhandled, yet prickled with goosebumps. Roughed up, gently. There is sweat and amyl nitrate in “Terminator Benelux”, “Poison Lips” and “Second Lives”, but brilliant sunshine and unbridled joy, too.
About | Advertise | Contact | FAQs | Terms of Use | Privacy Policy | Accessibility Policy © 2021 - TheUntz.com. All rights reserved.