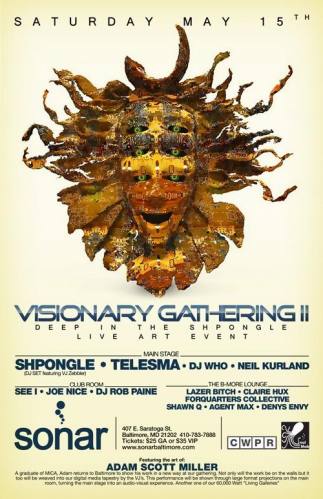 Visionary Gathering: Deep in the Shpongle
- Saturday May 15th –
LIVE ART EVENT
Sonar Baltimore
Address: 407 E. Saratoga St., Baltimore, MD 21202 / phone: 410-783-7888
Tickets: $25 GA / $35 VIP
www.sonarbaltimore.com
Featuring the art of: Adam Scott Miller
Artifacts excavated from exploring the relationships between mystical personal experience, and
universally relevant concepts, describes Adams work… Art is his tool for discovery, and a byproduct
of his experiences of consciousness. A graduate of MICA, Adam returns to Baltimore to
show his work in a new way at our gathering. Not only will the work be on the walls but it too will
be weaved into our digital media tapestry by the VJ’s. This performance will be shown through
large format projections on the main room, turning the main stage into an audio-visual
experience. Another one of our 60,000 Watt “Living Galleries”
MAIN STAGE
Shpongle (DJ SET)
Simon Posford and Raja Ram are ‘SHPONGLE’. A new world of traditional sounds, acoustic
guitars, Moroccan drums, Turkish operatic singing, cello, double bass, backing vocals and silver
flute blended together with the computer wizardry of Simon Posford’s studio production. With the
release of their second album, ‘Tales of the Inexpressible’ and its further explorations into diverse
sound production they are ready to unleash the multiversity that is ‘SHPONGLE’ on a host of
international tour destinations including a 16 party series in Brazil as well as tours through Japan.
VJ Zebbler
Zebbler’s visual performances have a genuinely live feel using heavy visual processing to latch
on to the musical rhythms and emotions on the fly. The resulting visual tapestry is always in sync
with the music and brilliant to the eye.
TELESMA
Telesma create an immersive experience of hypnotic rhythms. Their unique sound is driven by
the ancient didgeridoo, the kubing, and tribal percussion. Telesma’s inspirational message delves
into themes of higher consciousness, philosophy, connectivity and peace.
DJ WHO
(Percussion by Keith Meyer)
This B-More original is celebrating his 50th record release this year. Since 1993 DJ WHO’s name
has adorned the walls of record stores and firmly held his own in the DJ booths of just about
every major club in the world. With his originals and remixes showing up on diverse albums from
the Chemical Brothers to Fabric London and even a UK B-Boy Championship comp, there is no
question from Tokyo to NYC, DJ WHO moves the asses of the masses.
NEIL KURLAND
(Formerly DJ Knowledge)
A force in the Baltimore music scene for over a decade and the founder of Soul Mob Productions,
Neil’s ability to rock a dance floor has ignited a performance schedule jetting him from the shores
of Miami and Costa Rica to gigs in the Baltimore and Philadelphia underground.
RIDDEM WORSHIP
(In the club)
SEE I
The baddest group of mofo’s this side of the Mississippi. This DC based 9-piece
Reggae, funk and soul band features members of Thievery
Corporation, Wailin’ Love, Soul Brazil, Fort Knox Five and hometown heroes, All
Mighty Senators. They will undeniably bring the funk and set our Riddem Room deep
in its groove. Their last set was legendary and tonight we welcome them back.
DJ ROB PAINE
Rob Paine’s sound is a genre blurring combination of reggae, dancehall and house
music. He is the founder of Philadelphia’s Solomonic Crew and cofounder of Worship
and Shakedown Recordings. This floor rocking DJ will be sharing the night with See I
and making certain the vibes remain high.
B-MORE LOUNGE
Lazerbitch
One bad ass Lazerbitch. Her music has been called an explosion of the visceral and
ephemeral—the synthetic and organic. They are a band that takes viral beats and
hooks and combines them with strong vocal melodies, delivering a product that
harkens back to the iconic sounds of the 80’s.
Claire Hux
Their music bangs thick beats under catchy melodies aspiring for the perfect
harmony between Hip-Hop, R&B, and Club music. Songwriting producers by day,
Party starting catalysts by night. Claire Hux is a non-stop musical fireball invigorating
audiences everywhere.
SHAWN Q
Shawn Q is a hometown hero with a devout following. One of the pioneers of the big
room dance sound made famous on the floors in Miami and New York. Tonight he
will rock the decks with his incredible selections and wicked mixing…
FOUR QUARTERS COLLECTIVE
Jason Joeseph and JMack have come on the scene in a big way. Their monthly Soul
Full party with Higher Hands has been growing an their gigs have had them playing
to diverse dance floors throughout the region.
DENYS ENVY
One of the rising stars of the local dance scene. From Russia with love, this transplant comes to
us via Chicago. Be prepared for a wicked set.
AGENT MAX
This special agent is known for dropping arresting sets in DC and Baltimore. A key member in the
Red Door productions crew, tonight he takes the decks to bring his international sound.