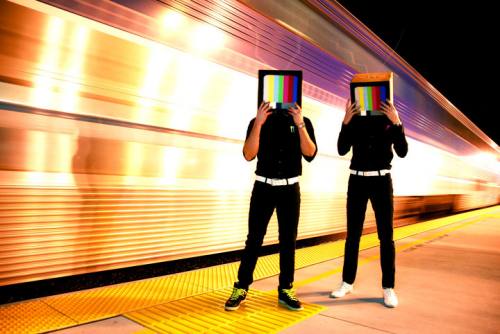 What: Virtual Boy @ The Magic Stick


Hotwiring naughty synth lines and dancefloor-crushing beats with elegant harmonic textures and twisted, pop-cultured hooks, Virtual Boy craft a grimy, cinematic sound all their own on the group’s recetn EP “Symphony None,” released on Alpha Pup Records. But even before Virtual Boy had an official release, taste-making DJs spanning packed clubs to BBC Radio were spinning their atmospheric bangers.


This stylishly oddball set of sound and style is what happens when two young, classically trained musicians discover their shared passion for dusty vintage synthesizers, new electronic-music genres, classic formalwear, and girls that look like they are starring in a ‘60s Godard movie. Out of that distinctive crucible, Virtual Boy was born – the duo taking its distinctive moniker from a rare Nintendo game console gathering dust in a Southern California dorm room.


In May 2009, with a push from The Glitch Mob, Mary Anne Hobbs dedicated a segment of her influential BBC Radio 1 show to highlighting Virtual Boy a special shout-out, giving their standout track “Lost Treasure” pride of place in her set; as Hobbs’ show was the place where game-changing artists like Burial, Kode9 and Flying Lotus were discovered. Before Allen and Walker had the opportunity to play to small local clubs, they were touring nationally, playing sold out theatres and arenas and as such, it may take Virtual Boy a minute to hit the cosmosphere, but they will reach the top of their game much, much sooner.