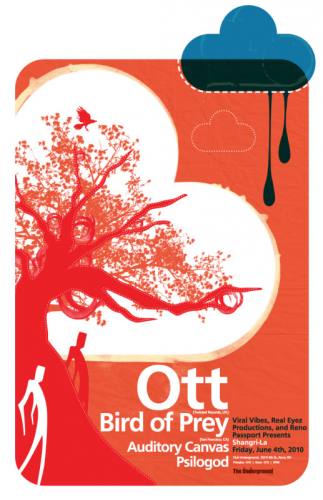 Viral Vibes and Real Eyez Productions are teaming up to bring you
"Shangri-La"
An incredible 21+ event over 6 months in the making!
Featuring:
Ott (Twisted Records / Autonomous Music)
United Kingdom
Ott was doomed to be a teenager in the cultural wasteland that was the mid-1980's provincial England. After a brief period wandering aimlessly through the hairsprayed deserts of New Romanticism and poodle-rock he found refuge in the warm, inviting sounds of Scientist, King Tubby, LKJ, and Prince Far-I and the effortless grace of European experimentalists Neu! and Kraftwerk.
The end of the 1980's brought with it a cultural and musical revolution and Ott headed to London to immerse himself in the new energy. Initially unimpressed by the frantic, unmusical clatterings of acid house and "rave" he discovered a new wave of artists who apparently shared his love of organic dub and pristine electronics. Artists such as The Orb, Dub Syndicate, FSOL and African Head Charge.
Working obsessively, 18 hours a day, seven days a week for the next ten years, Ott began developing the skills which would see him go on to work with many of those who created the sounds which inspired him in the first place - Brian Eno, The Orb, Youth, African Head Charge, Steve Hillage, and On-U-Sound.
In the meantime, Ott hatched a plan to remix half a dozen or so classic Hallucinogen trance tracks and release them as dub mixes - slower, fatter and more chillout friendly. In 2002 the album "Hallucinogen in Dub" was released via Twisted Records to universal acclaim.
Buoyed by the success of "Hallucinogen in Dub", the following year Ott gathered together and released his earlier sonic experiments as the album "Blumenkraft" which was also very well received and which attracted a great many listeners around the world.
The next few years passed in a whirl of gigs, remixes [Shpongle, Entheogenic, Tripswitch] and collaborative projects - "Umberloid" with friend and multi-instrumentalist Chris Barker, and "Gargoyles" with Simon Posford [Hallucinogen, Shpongle]. During this time Ott travelled the world and wrote his third album "Skylon" - which was released on Twisted Records in early 2008.
Bird of Prey (www.myspace.com/birdofpreysf)
San Francisco, CA
Auditory Canvas (www.myspace.com/auditorycanvas)
Reno, NV
Psilogod (www.myspace.com/psilogodproject)
Reno, NV
This event will include live painting by Ecsyle and Bazar1, and will feature ALL LIVE SETS!
LOCATED AT:
The Underground
555 E. 4th St.
Reno, NV 89503
Doors @ 8:30PM
Show @ 9:00PM
Presale tickets will be available for $10 online at www.inticketing.com OR around town at The Melting Pot OR Recycled Records.