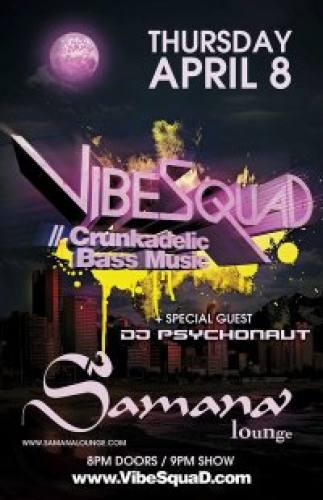 VibeSquaD has the look and feel of a regular humanoid DJ / producer, but as the Crunkadelic Bass Traveler he tours the solar system bumpin’ his signature sound to all the deep space inhabitants. His spaceship leaks beats to the outer edges of the galaxy, leaving a blast of subterranean ill bass in his wake. Creatures are drawn to these sounds, regularly converging in large groups to observe and move to his music.
Taking cues from classic electronic acts like Kraftwerk, The Art of Noise, and Front 242, VibeSquaD incorporates the reliable sounds of Chicago, Detroit, Miami, and the UK, informs it with his background in classic rock, psychedelic jam, and diverse jazz roots, then zaps it all with neon lasers.
The sounds he produces transmit a positivity capable of inducing anything from temporary stress relief to outright elation. Tracks from his album Joyful Noise cause a type of heightened euphoria in fans, leading them to shake and bounce uncontrollably and convince their robot and alien friends to voyage thousands of light years just to witness his massive dance parties.
VibeSquaD’s launch pad is in Denver, Colorado (North America), but he travels all over the planet spreading bouncy beats, elastic synth lines, glitched-out samples and wobbly bass to gyrating, electrified masses.