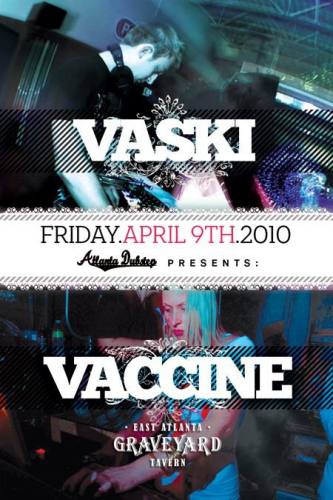 Atlanta Dubstep presents:
VASKI
[Rottun Recordings / Black Spot Audio - Minneapolis, MN]
http://www.myspace.com/vaski
When DJ/Producer Vaski sent his demo to Rottun manager Excision, he had no idea of the journey that he was beginning. With his first two tracks storming the Beatport top ten charts, Vaski hit the studio, returning to his Electro House production roots for the massive Terror Dome EP, featuring the self-titled track as well as the hit single "You Wouldn't Understand," Peaking again in the top ten of Dubstep on Beatport. Vaski's productions and local DJ sets began to gain attention of international promoters and DJ'st. Vaski spent the next season DJing at many Twin Cities venues, playing at the famed First Ave, Dinkytowner, and The Loft all the while working on his next work. World on Fire EP shook not only the Beatport charts but the entire Dubstep community. All five tracks peaked in the top 25 in Dubstep on Beatport, two tracks in the top ten, and the famous "Get Down" claiming its rightful place as a number one hit. This massive release rocketed Vaski to where he is today: smashing through his international tour, gaining rapid popularity for his unconventional stage presence, and continuously producing ridiculous and catchy bass lines. On the horizon for Vaski is the continuation of his tour, and his biggest production to date.
VACCINE
[Hotflush Recordings / NonPlus+ Records - San Diego, CA]
http://www.myspace.com/vaccinedub
Vaccine is the production alias of Christine Clements. Having been involved with the promotions end of the industrial rock and IDM music scenes since she was a teenager, and running drum & bass and dubstep record labels with her husband, ASC, writing her own music - after she'd been promoting other people's for years - was a logical progression.
Drawing inspiration from synaesthesia and her melting pot of musical influences, Vaccine's style has been recognized as being considerably very melodic and not necessarily as dancefloor-orientated as her male cohorts. XLR8R magazine noted her "subtle melodies and echoed vocals", as well as stating that "(Vaccine's) constructions aren’t necessarily main floor rave fodder, but rather, comedown music for a 6 a.m. She is also notable for being the first female producer in dubstep, within what was up until then a genre whose producers were almost, if not entirely, male. Her DJ mixes as well have attracted attention for their careful commitment to precise blends, mixing in key, and unexpected multigenre inclusions.
Vaccine is not solely writing dubstep anymore. Never one to be confined by formulas or tempo, as evidenced in her DJ mix selection, Vaccine has recently been slinging her talents further afield writing the melodic, IDM style of drum & bass popularized by Instra:mental and dBridge's Autonomic Podcasts. She has crafted a live PA and has also been working with a fashion designer called Ernte on music for his runway shows. Recently Renoise (the program she writes music in) is pushing her as the face of their site on their music player. Look for her upcoming releases on Disfigured and Nonplus+.
DJ SKY
[Second Sight / Zone 7 / MOS - ATL]
$5
21+
Located at:
GRAVEYARD TAVERN
1245 Glenwood Ave SE
Atlanta, GA 30316
404.622.8686
http://www.graveyardtavern.com
Sponsored by FRANK 151
http://http://www.frank151.com
Sound provided by Atlanta Dubstep!
Follow us!
http://myspace.com/atldubstep
http://facebook.com/atldub
http://twitter.com/atlantadubstep