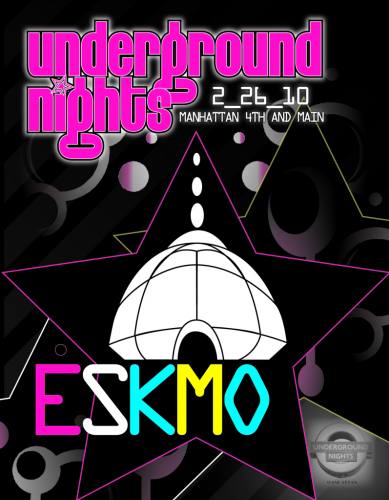 UNDERGROUND NIGHTS PRESENTS:
ESKMO
"Brendan Angelides, aka "Eskmo" is a San Francisco based producer & live performer. He currently has releases on Warp Records, Planet Mu and Ancestor.
He has been producing and performing live electronic music since 1999 and his sets are currently based around Ableton Live utilizing various midi controllers and FX running with on the spot warping, queing and key work. He has covered numerous styles throughout the years and it has grown to a fusion of thick, floor-creaking bass layered with rich, oozing melodies and syncopated rhythms.
Eskmo has been featured in numerous publications and on such shows as BBC Radio 1 and RinseFM and has performed throughout the UK, into Spain, France and Canada. Aside from international bookings, he has performed in clubs, at theaters and at festivals in major cities across the US. He has shared the stage with notable acts such as Amon Tobin, STS9, Flying Lotus, Scuba, The Glitch Mob, Si Begg, Tipper and others.
In 2009, after years of releasing on various dance labels, Brendan started his own fully distributed digital label entitled "Ancestor". The label was created to release his works and collaborative projects of all styles.
WITH OUR BIRTHDAY BOY OPENERS...
THE EPIC BATTLE WE'VE ALL BEEN WAITING FOR
QUINTANA
Latter Day Dub - Underground Nights
Ogden, UT
VS
ILLOOM
Dubscouts
SL,UT
ISHE
Blingfaced/Velcro City Records
Denver, CO
ON OUR SECOND STAGE WE HAVE
DJ JULLIETTE
ARTIFAX
NICK BLISS
DRINK
FOR THOSE OF YOU WHO HAVE COME DOWN YOU KNOW WHAT AN AMAZING NIGHT THAT WE BRING TO THE MANHATTAN. FOR THOSE OF YOU WHO HAVEN'T MADE IT OUT THIS IS A NIGHT YOU DON'T WANNA MISS. WE HAVE AN AMAZING VIBE AND ALL WAYS GOOD TUNES
DOORS ARE AT 9:00 PM
$10 BEFORE 11PM AND $15 AFTER 11PM
GET THERE EARLY, THIS NIGHT WILL PACK THE HOUSE
AND DON'T FORGET TO TELL ILLOOM AND QUINTANA, 'HAPPY BIRTHDAY!'