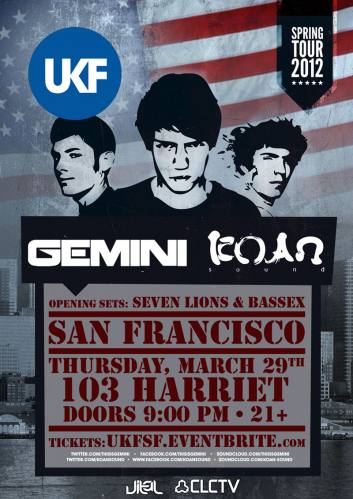 
★ Enter to win a FREE ticket! Post a track by a DJ performing HERE, then SHARE the event to your wall!


Gemini is a 21 year old Dubstep producer from Leeds. He released his debut EP ‘Blue’ in 2011 and followed up with the release ‘Graduation’ shortly after.


He has remixed many artists including Hadouken!, Ed Sheeran, deadmau5, and Jamiroquai, and is now set to collaborate with electro producer Feed Me on the upcoming Feed Me EP.


KOAN Sound is an electronic music act consisting of Will Weeks and Jim Bastow, both hailing from Bristol, UK.


The group’s early origins and influences lie mainly in acoustic based music, from bands such as Incubus to RATM, but it wasn’t until 2005 that the duo became immersed in electronic music through acts such as Noisia and The Prodigy. Soon after, the growing Dubstep scene in Bristol began to inform their productions, eventually leading to a string of releases on various labels.


In early 2011 KOAN Sound released their first extended single, the ‘Max Out EP’. The release signalled a turning point in their production, gradually moving away from the 140bpm template and showcasing a wider range of styles than before. It also helped bring more attention to the act, and led to working with a number of artists, including singer/songwriter Ed Sheeran.


Later in the year the group would unveil their biggest release to date, the ‘Funk Blaster EP’ on Skrillex’s OWSLA imprint. The EP achieved the No. 1 spot in the Beatport releases category, and received exclusive featuring from US-based magazine Rolling Stone.


The duo rounded off the year with DJ sets across Europe and North America, and picked up ‘Best Breakthrough Artist’ at the Dubstep Music Awards in November.


For updates, giveaways and more, become a fan: