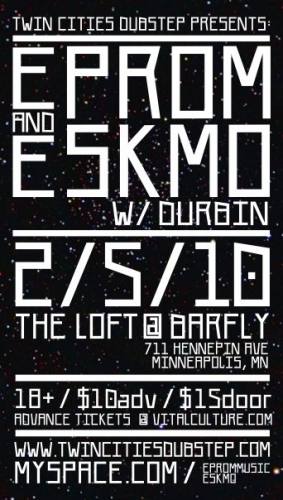 EPROM - The Mixtape 2009 (100% original production)
http://www.eprommusic.com/mixtape/The%20Mixtape.mp3
ESKMO – Colorbrain Mix
http://media.brainfeedersite.com/podcast/Eskmo.mp3
ESKMO - Ancestor Mix 2009
http://eskmo.com/site2/music/ESKMO-Ancestor-Mix-2009.mp3
Durbin - In The Mix '09
http://soundcloud.com/durbin-1/tracks
EPROM- http://www.myspace.com/eprommusic
ESKMO - http://www.myspace.com/eskmo
"Brendan Angelides, aka "Eskmo" & "Welder" , is a San Francisco based producer & live performer. He has been producing and performing live electronic music since 1999 and his sets are currently based around Ableton Live utilizing various midi controllers and FX running with on the spot warping, queing and key work. He has covered numerous styles throughout the years and it has grown to a fusion of thick, floor-creaking bass layered with rich, oozing melodies and syncopated rhythms.
Eskmo has been featured in numerous publications and on such shows as BBC Radio 1 and RinseFM and has performed throughout the UK, into Spain, France and Canada. Aside from international bookings, he has performed in clubs, at theaters and at festivals in major cities across the US. He has shared the stage with notable acts such as Amon Tobin, Flying Lotus, Scuba, The Glitch Mob, Si Begg, Tipper and others.
In 2009, after years of releasing on various dance labels, Brendan started his own fully distributed digital label entitled "Ancestor". The label was created to release his works and collaborative projects of all styles. The latest release aptly named Hypercolor, has helped him gain a new respect and awareness in wider circles. In May 2009, Boomkat rated the release #1 in a list of 14tracks reflecting a new sound emerging along with Jamie Vexd, Joker, Zomby, Hudson Mohawke and others. He was subsequently contacted by Clash Magazine in the UK regarding an interview about the release as it jumped to the top 10 on sites like Beatport, Addictech and Digital Tunes.