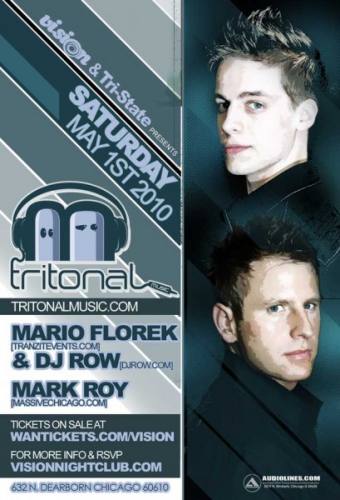 VISION SKY ROOM
| TRITONAL |
Hailing from the United States, Tritonal consists of ChadCisneros and Dave Reed, two Producers/DJ’s who have launched themselves to theforefront of trance music. In thestudio, they focus their boundless creativity and deep passion for designingnew sounds to produce modern, slamming tracks. Tritonal’s music has been described as carefully crafted,uplifting progressive trance with an edgy, melodic seriousness to it. But, it is in live performances wherethey really come together and shine. Using their combined talents, Chad and Dave engineer cutting-edgeperformances that rival the best in today’s music scene.
The two met online in early 2007 and quickly developed arelationship through their discussions about the techniques of sound design andmusic production. At the time,Chad was busy in Austin, TX remixing for some of the world’s most prolificlabels such as Armada, Lost Language, Baroque, AVA Recordings and Alter EgoRecords. Dave, on the other hand,was busy in the D.C. area producing his own artist album. They soon came torealize that their sounds complemented one another perfectly and that theywould be able to achieve much greater things if they combined theirefforts. It was at this time thatDave decided to move 1,500 miles across the U.S. so that the two could worktogether on a daily basis.
Something special was beginning to emerge that was biggerthan either had previously experienced. Musically, the two compliment one another perfectly. Within the first year of producingtogether, Tritonal was being supported and played by every big name DJimaginable. The two worked tirelessly in the studio to produce hit songs anddevelop their unique sounds. Thehard work definitely paid off, as they saw their music being licensed byAnjunabeats, Flashover, Armada, Coldharbour, AVA, Levare, Alter Ego andothers. They were have beensupported many times over on Armin Van Buuren’s A State of Trance, Above &Beyond’s radio show, “Trance Around the World”, Markus Schulz’s “Global DJBroadcast” and Ferry Corsten’s “Countdown”. They were voted by thousands of listeners as the best trackon A State of Trance getting Future Favorite on ASOT with their track, PiercingQuiet. To top things off, Tritonalwas placed on Above & Beyond’s “Anjunabeats: Volume 6” album, MarkusSchulz’s “Armada at Ibiza”, Markus Schulz’s Toronto 09’ album, Armin VanBuuren’s AState of Trance Top 15, Abbott & Chambers’ “Alter Ego Sessions:Volume 2” album and many more.
Armed with two studios in Austin, the dedication and workcontinue daily as they strive to make an enormous impact on the trancecommunity. They are truly one of the most exciting duos in today’s trance musicscene. Look for big things from these two guys in the years to come!
TRITONAL [tritonalmusic.com]
w/ openers:
Mario Florek [TranzitEvents.com]
& DJ Row [DJRow.com]
Mark Row [ MassiveChicago.com]
TABLE RESERVATIONS
In need of some extra VIP treatment? Call VIP Hosts
Joe B. or Catherine at 312.504.9400
CELEBRATING A SPECIAL OCCASION?
Contact Valerie Velez at 312.266.1944 or send her an email at parties@visionnightclub.com.
Click HERE to check out our personal party packages