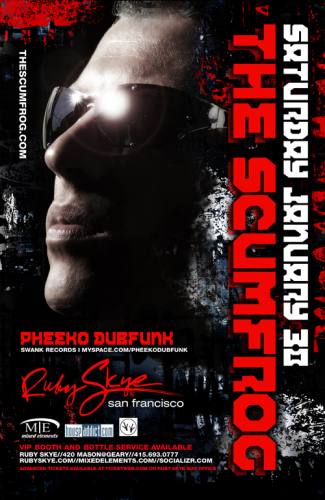 The Scumfrog's impact on the global dance music scene is undeniable. Since 2002, he has scored ten number one club hits in the US and UK. Whether on tour in the US, Asia, South America, Europe, his extraordinary performances continue to draw bigger and more devoted crowds.
After a successful 2007 with an Ibiza residence and many critics called his remix of “The Young Folks” the tune of the summer, and 2008 paving the way for a residency in Italy, this amphibian is back to take on 2009 with full force. His new singles “Escape” (with singer Polina) and “Sandia” are sure to make waves, and his popular radio show Glam Scum International is a growing phenomenon as a podcast, and being licensed to radio stations around the world.
Having re-introduced himself to Europe last summer by ways of Ibiza residencies at mega clubs Privilege and Space, and widely successful gigs in the UK, France, Russia, Spain and Italy, he is now preparing for a more intensified touring schedule. A renewed focus on his live performances this year is based around his new residency at Italy’s premier summer club Villa Delle Rose.
A streak of award winning productions and remixes for artists like David Bowie, Britney Spears, Missy Elliott, and Annie Lennox, drove The Scumfrog (aka Jesse Houk) to record his first artist album in 2004, entitled "Simmer", showcasing his talents as a producer, songwriter, musician, and vocalist. The following year, the album's lead single "Music Revolution" became The Scumfrog's first national TV campaign for Chevrolet's long running HHR commercial.
His mix compilations have also contributed to his solid reputation. In 2003 he released Extended Engagement, and in 2006 he launched the absurd brand Mega Scum!, posing himself in a bikini on the cover, spoofing many established compilation covers.
As a performer, The Scumfrog is without equal in the world of dance music. His widely publicized and much talked about live performances include live vocals, percussion, samples, and an array of guest performances. His colorful live sets and innovative productions continue to land him on magazine covers around the world, and have made him a regular guest on many high profile Dance oriented Radio and TV shows. During the Miami WMC in 2006, he launched the first ever all-star live DJ band "DJs Are Alive", and in 2008 he started his own radio show “Glam Scum” on Sirius Satellite radio.
Jesse moved from his native Amsterdam to New York in 1997, where he recorded the first Scumfrog single, "The Watersong." In 2001, "We Love You" (a cover of the Rolling Stones 60's classic) became the first Scumfrog number one UK Club hit, and he's been a familiar face behind turntables around the globe ever since. In May 2003 he did his first Essential Mix on BBC's Radio1, and is a frequent contributor to Pete Tong's various media productions. The Scumfrog's brand new website (www.TheScumfrog.com) features audio samples of all his productions, a diary, tour dates and an insightful autobiography, plus instant links to his MySpace page, Youtube, and his greatest hits/remixes on iTunes and Beatport.
The Scumfrog, it's a Music Revolution, still!
About | Advertise | Contact | FAQs | Terms of Use | Privacy Policy | Accessibility Policy © 2022 - TheUntz.com. All rights reserved.