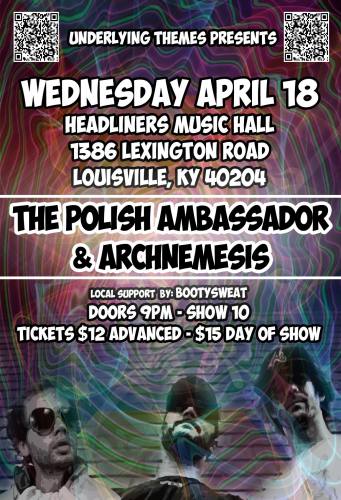 What: The Polish Ambassdor & Archnemesis @ Headliners

The Polish Ambassador (aka David Sugalski) is a beat machine from the future. Hailing simultaneously from the far reaches of other-dimensional universes and Oakland, California, this dude drops his own unique blend of electro-funked, glitch-tweaked, wobble-freaked breakbeats that will have you dropping that bottom like it was \'92 ... 3092, that is. A nationally touring artist, The Polish Ambassador builds all of his live sets from a monstrous stash of original drums, bass, synth, and vox lines. "No genre left behind," Sugalski jokes as he blends elements of funk, glitch, IDM, hip-hop, \'80s music, jungle, and dub into a beat soup that will instigate healthy doses of booty shake and fist pump.

Claiming to be Poland\'s ambassador to the universe, Sugalski has independently released numerous studio albums, including Diplomatic Immunity (2007), The Phantasmal Farm (2008), I Found Him Now I Must Kill Him (2009), Mating Season (released under the Ample Mammal alias) (2010), and First Words (2010). All of these albums have obtained favorable press and have achieved regular rotation on college, independent, and internet radio stations. His latest effort, titled Future, Sex, Computers (2011, with Remixes & B-Sides released later that same year), is no exception.

Synthesizers and a pure spirit are this ambassador\'s primary weapons. Join his army and help him annihilate bad beats marring the earth with shame and disgrace.

Formed as the musical brainchild of Curt Heiny and Justin Aubuchon (Telepath, MO Theory), Archnemesis creates its distinctive sound by combining original music with samples ranging from early 20’s blues and jazz to modern hip-hop and soul. With their first EP "Diamonds and Glass" and their debut full length album "People\'s Radio" available now for free download atwww.archnemesismusic.com, Archnemesis continues to turn heads at festivals and club shows while elevating the standard for modern electronic music.