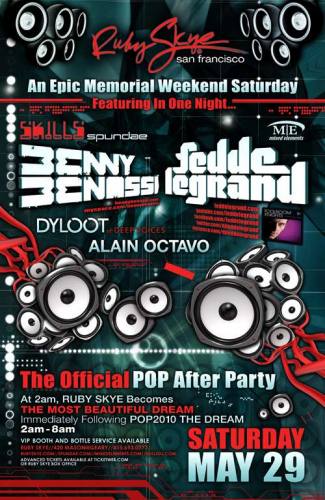 What: The Official POP After Party (LATE NIGHT 5/29)

Fedde Le Grand & BENNY BENASSI
Saturday, May 29
Rare breeds like Fedde Le Grand are few and far between, and so when someone like this comes along it’s right that the world sits up and listens. He’s a Dutchman blessed with such talent that keeping up to speed with what he does is a task in itself
It could be said Fedde came out of nowhere, riding off the success of a hit record. Well, to set the record straight; this couldn’t be further from the truth. Le Grand has spent the majority of his earlier youth grafting, spinning records in his Native country and cutting tracks until the inevitable happened. Put your hands up for Detroit was produced in the bedroom, released by one of the biggest labels in dance, and it enabled Fedde to step out into the world of Electronic Dance. His abilities in the studio are endless. Together with his good friend and production partner Funkerman, they’ve churned out some immaculate material that has slotted into an absolute cross section of fellow DJS. The Flamingo Recordings imprint now stands as one of the most forward-thinking and exciting labels in EDM, with top flight acts eagerly hanging on for news of new releases and remix work.
Add to all the above Fedde’s rammed DJ diary, including his residency at world-famous Pacha Ibiza, countless festivals and headline gigs around the world, and it’s clear that this is man who has conquered his game, plans to stay there for a long time to come. With his debut artist album Output released in the second half of 2008, he is set to storm the international music charts and cement his position as a household name. His passion for music is evident; the quality of his sound is undisputed. Fedde Le Grand might just be looking for a name change; perhaps Fedde Le Tres Grand is on the horizon?
Benny Benassi was born in Milan in 1967 and then grew up in the provincial town of Reggio Emilia, Italy. He started dj-ing when he ws still at school and has been producing with his cousin Alle Benassi for about ten years at Off Limits studios. His first as a producer was with the track I feel so fine by KMC feat. Dhany which went to n°1 in the UK club charts in 2001.
The following year, working under the BENNY BENASSI presents THE BIZ trademark, Benny and Alle came up with Satisfaction and in one fell swoop ravaged the dancefloors and dominated sales charts round the world. The album “Hypnotica followed. In the meantime Benny and Alle produced more melodic dance music under the Benassi Bros. banner. The charts of half the planet gave them thumbs up.
The Benassis have also remixed artists such as Outkast, David Guetta, Moby, Goldfrapp, Paul Oakenfold, Faithless and Public Enemy, to name but a few.
Benny has won tons of prizes and awards around the world and continues to tour the five continents with his unique style, once described as electro, sort of house-tec, dirty and cool, sweaty and smooth.
In 2008 Benny and Alle won a Grammy Award for his remix of Public Enemy’s “Bring the noise”. The new album “Rock n Rave” contains tracks featuring Black Box, Farenheit, Dino Lenny, Mia J, Public Enemy, Channing and Iggy Pop.
His own productions are released through Energy Productions in Italy and Ultra in U.S.A. At the same time, Benny talent scouts for his own brand new label, Pump-kin, designed to create space for young djs and producers of electronic club music.