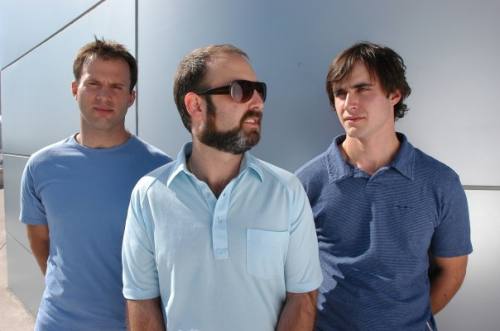 THE NEW DEAL
http://www.thenewdeal.com
At the vanguard of a new progressive style, the New Deal has become a live touring phenomenon. They have appeared at Bonnaroo, Langerado, Jazz Fest New Orleans, the Coachella Festival, Street Scene in San Diego, Berkfest, Gathering of the Vibes, Camp Bisco, and the Detroit Electronic Music Festival to name just a few. They have headlined over 400 shows in the past 4 years. the New Deal inspires audiences of all kinds, from packed dance clubs across North America, to spellbound receptions during opening tours with Herbie Hancock and Page McConnell from Phish.
Big Gigantic
http://www.myspace.com/biggigantic
Boulder, Colorado’s Big Gigantic have been killing the live electronic music scene as of late. In the past few months, Big Gigantic went from playing a few club gigs around Colorado to opening for STS9, playing upcoming shows with Shpongle and Bassnectar, headlining shows through the South East and hitting summer festivals throughout the country.
Big Gigantic is the Latest project from Dominic Lalli (Motet saxophonist/producer) and drummer Jeremy Salken. The two-man sound-machine of Lalli and Salken showcases an array of gripping composition combining elements of a DJ and a live band setup, mixing thoughtful melodic ideas, with pulsating dance tunes. Big Gigantic flavors the electronic music scene with powerful sax solos and soulful synth lines on top of super hot beats.