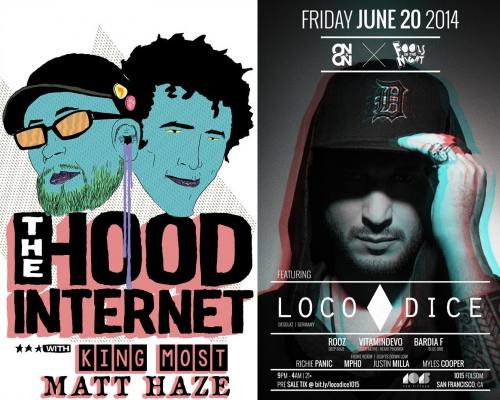 What: The Hood Internet | Loco Dice

A mash-up crew who came to fame thanks to their genre-jumping mixes, the Hood Internet were formed in Chicago after members Aaron Brink (ABX) and Steve Reidell (STV SLV) both moved to the city with fresh college diplomas. They met in the indie band May or May Not, but after hearing mash-up DJs like Girl Talk and Them Jeans, they headed straight for the laptop and began combining Lil Wayne with Modest Mouse, Swizz Beatz with Deerhoof, and R. Kelly with Jens Lekman. Initial results were uploaded to the Hood Internet blog in 2007 and it didn’t take long for the music to explode. Right-click downloads quickly ticked into the thousands and by the end of the year New York Magazine had featured the band. The Hood Internet Mixtape, Vol. 1 also landed in 2007, while 2008’s mixtape The Hood Internet vs Chicago landed on some media year-end Top Ten lists, including Current TV’s. For music not released in any traditional format, it was a milestone, as it was in 2009 when the Ting Tings performed their song “Shut Up and Let Me Go” live with a bit of Estelle’s “American Boy” in the middle, a nod to the Hood Internet’s mash-up mix of the songs. In 2010 the group got some cool corporate sponsorship when the New York City streetwear brand Mishka sponsored their Trillwave mixtape. In 2012, the Hood Internet moved beyond the mash-up with their debut studio album, Feat. Released by the Decon label, Feat featured a wide range of guests including Black Moth Super Rainbow’s Tobacco, AC Newman, and Kid Static.


Loco Dice is widely considered to be one of the cornerstones of the electronic music community.Through a finely-balanced combination of breaking artists via his highly influential record label Desolat; his own accomplished production catalogue for imprints such as M_nus, Cadenza,Ovum, Four:twenty and Cocoon; and his legendary DJ sets across the globe, Dice has forged a reputation that has seen him enter the small band of elite underground DJ’s.His appeal stems from a particular skill that DJs spend a lifetime trying to hone. In Dice this is inherent. His ability to puzzle together intangible moods and tap into a crowds collective consciousness fuels his internal cinematic view of music.

As the highly respected tastemakers Resident Advisor explained in their Top 100 Poll »what sets him apart isn‘twhat he plays, but the way he plays«. His unique mixing style is informed by a life-long affinity with Hip-Hop culture.His time as Hip-Hop DJ reached its pinnacle in the mid-90’s when he toured with some of the genre’s leading artists. And his musical journey appears to now be coming full circle.With the likes of ICE-T recently introducing him to the stage at Movement 2012 in Detroit, or Hip-Hop bible Vibe Mag pinning him as » a most dominant dance music force, (who is) treated like royalty and respected like a God«, Loco Dice’s appeal is a far-reaching as ever.