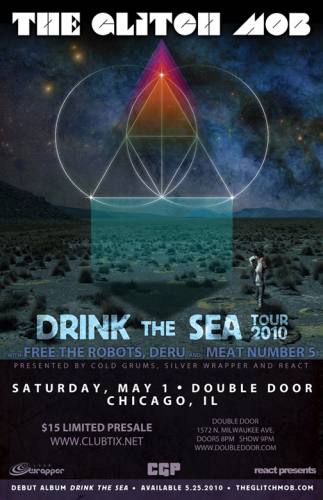 What: The Glitch Mob @ Double Door

Taking influences from hip-hop, rock and experimental electronic genres, The Glitch Mob have crafted a new form of futuristic dance music. Their wicked combination of ferocious bass, neck-snapping drums and complex melodies has earned them a worldwide grassroots fanbase. What started as a loose affiliation soon stuck as edIT, Ooah and Boreta found themselves frequently playing the same shows, and eventually collaborating during sets. Their live performance is a complete reimagination of the laptop DJ paradigm as they flow like a seasoned jazz trio – each taking the lead at intuitive moments – layering chords, vocal snippets and drum patterns into an overwhelming digital wall of sound.
What has resulted is the very distinct Glitch Mob aesthetic, blending the head-nod factor of hip-hop tempos with outrageous basslines and microscopic production trimmings. Alongside other L.A. luminaries like Flying Lotus and Daedelus, The Glitch Mob have been torch bearers for the exploding West Coast instrumental hip-hop slash electronic movement. Individual members of The Glitch Mob have released music via their own Glitch Mob Unlimited imprint, a subsidiary of Alpha Pup Records. The year 2009 has seen the release of Glitch Mob remixes for TV On The Radio and STS9, cementing their reputation for jaw-dropping, cutting-edge production.
presented by Silver Wrapper, Cold Grums and React