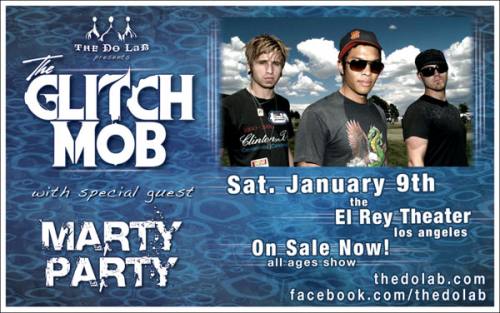 What: The Do LaB presents The Glitch Mob

The Do LaB Presents The Glitch Mob
We are proud to present our good friends The Glitch Mob live in Los Angeles on January 9th!
Don't miss the first Do LaB presents event of 2010!
*The Glitch Mob*
Taking influences from hip-hop, rock and experimental electronic genres, The Glitch Mob have crafted a new form of futuristic dance music. Their wicked combination of ferocious bass, neck-snapping drums and complex melodies has earned them a worldwide grassroots fanbase. What started as a loose affiliation soon stuck as edIT, Ooah and Boreta found themselves frequently playing the same shows, and eventually collaborating during sets. Their live performance is a complete reimagination of the laptop DJ paradigm as they flow like a seasoned jazz trio – each taking the lead at intuitive moments – layering chords, vocal snippets and drum patterns into an overwhelming digital wall of sound.
What has resulted is the very distinct Glitch Mob aesthetic, blending the head-nod factor of hip-hop tempos with outrageous basslines and microscopic production trimmings. Alongside other L.A. luminaries like Flying Lotus and Daedelus, The Glitch Mob have been torch bearers for the exploding West Coast instrumental hip-hop slash electronic movement. Individual members of The Glitch Mob have released music via their own Glitch Mob Unlimited imprint, a subsidiary of Alpha Pup Records. The year 2009 has seen the release of Glitch Mob remixes for TV On The Radio and STS9, cementing their reputation for jaw-dropping, cutting-edge production. The Glitch Mob plan to release their debut full length album in early 2010.
*MartyParty*
MartyParty writes pretty songs that turn hard and heavy when you least expect it. Just like life itself. This is music for those that appreciate melody and hooks, but lust for beat and heavy bass.
Marty Folb aka MartyParty – born and raised in South Africa, found his way to San Francisco 15 years ago as a software programmer. After discovering the music of the west coast and wanting to “Africanize” it, Marty picked up Ableton Live and began to learn the art of Music production in 2007. He soon released his first digital album “Walkerville to the West Coast”, named for the town he grew up in and a tribute to his path to the US.
Marty got tired of how all electronic music followed the same formula so he set off on a mission to re-invent electronic music and cross-pollinate it with all other music he loves. Marty’s production can best be defined as IDM based hip-hop.
Marty started a movement back towards the power of the melody and instrumental composition. Song writing has always been Marty’s passion instead of the typical beat style dj production. The music is a hybrid of electronic music and hip-hop that together forms a totally new flavor of urban beat with the pretty hypnotic elements of electronic hard-hitting bass.
The MartyParty live performance is an intense journey that pulls together gorgeous instrumental, bass heavy songs, and overlays these with acapellas and samples played live. The result is a truly “crunky” and “hypy” experience like no other. Marty has been playing his live sets to crowds all over the US.
Marty partnered with Josh Mayer (Ooah) of the infamous Glitch Mob, to form PANTyRAiD. Signing to Marine Parade Records, they produced and are releasing their debue album “The Sauce” in June 2009. This project has already received rave reviews.
MartyParty can be heard streaming at his website www.martyparty.org where he streams all of his original compositions as he writes them, before any remixing or collaboration.