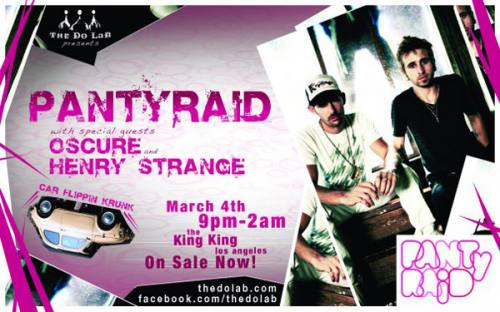 What: The Do LaB presents PANTyRAiD

We are proud to present our next intimate event at the King King in Hollywood featuring PANTyRAiD on March 4th
It's gonna be a night full of "Car Flipping Krunk" that's sure to sell out, so please buy your pre-sale tickets early.
-- The Line Up --
* PANTyRAiD *
PANTyRAiD is the product of two music producers that met on the West Coast of the United States and share the same appreciation for well produced electronic dance music. Martin Folb (aka MartyParty) and Josh Mayer (aka Ooah) have always loved the art of songwriting instead of the typical club track production.
They set off to write melodic, musical journeys within the electronic genre. Each song has its own character, its own intention, and often crosses over many genres of electronic and traditional music. One thing is consistent in all PANTyRAiD production, attention to detail, not found in typical electronic production. Constant variation in the beat, and an almost overwhelming palette of instrumentation and audio tricks and techniques.
The combination of MartyParty and Ooah has started a movement back towards the power of the melody and instrumental composition. Together they have invented a formula for producing intense club songs that pull together gorgeous and modern electronic sounds with hard hitting beats, brining the best of hip-hop, dubstep and other forms of experimental electronic music.
The music is a new flavor of urban beat, a fresh new sexy sound that draws those that love to dance.
http://www.pantyraidmusic.com/
http://www.myspace.com/pantyraidmusic
http://twitter.com/pantyraid
* OSCURE *
Oscar Gamboa II (OSCURE) has been one of the integral pioneers of the Los Angeles Underground Dance music scene, djing, producing and remixing music for over a decade. He's a well established Los Angeles dj/producer, and has licensed and released on his own label LABA Recordings as well as local indie labels such as Off World Music, Phunkedup Records, DMT3 Traxx, Fifth Gear,Red Bull Academy, and F.G.P. Music(Funky Ghetto Phonics). Colaborations in the Studio include talented musicians like Run DMC, Sula, Medusa & the Feline Science, ILL Knob(Wu-Tang), Stacy Brandt, and many more. An Audio Engineer with a Certification as Pro Tools Operator for Music and teaches Reason at www.reasonschool.com, Pro Tools, Traktor 3, and other programs.
If and indication of Oscure’s past is showing us his future we have a lot more to see of this bright, talented, individual who’s music is just being recognized.
http://www.oscure.com/
http://www.myspace.com/oscure
http://twitter.com/djoscure
* HENRY STRANGE *
A son of a biologist, Henry Strange spent much of his youth in his father’s laboratory counting fish eggs. But much like his father who was also a painter, Henry had a creative side, a love for music. He performed classical guitar and drums in rock bands for many years from youth throughout college.
Henry spent sleepless nights in the studio with old modular synthesizers studying the science of sound and synthesis. There he found his love for the avant-garde, which gave him a new focus to compose music with an experimental edge. He continued to produce several albums, and a series of experimental concerts in surround, sound and visual installations, and eventually started Pure Tone Productions, Inc. a production company devoted to the research of sound and the production of modern music.
Beyond composing for media, Henry continues his quest as an performing artist, scratching a Theremin, live processing and arranging a blend of hip hop and experimental textures, angular beats, and vocoded beatbox.
http://henrystrange.com/
http://www.myspace.com/henrystrange
twitter.com/henrystrange
-- Show details --
-- This show is presented by The Do LaB --
Based in Downtown Los Angeles, The Do LaB is an ensemble cast of creatives ranging from artists, event producers, lighting designers, DJs, constructors, welders, costumers, musicians, and the performance troupe Lucent Dossier.
Since 2000, The Do LaB has been dedicated to treating experience itself as the art form. Their exceptional annual events–including the Lighting in a Bottle Music Festival–and jaw-dropping, large-scale art environments, have been attracting a devoted following among the West Coast’s underground creative community, and around the world. While bringing the visions of their home-grown art collective to life, The Do LaB has evolved into a respected event creations company, winning over major brands, music festivals, and trade-shows, with their unparalleled creativity and innovation.
Stay tuned for what's coming next!
http://thedolab.com
http://www.facebook.com/thedolab
http://www.twitter.com/thedolab