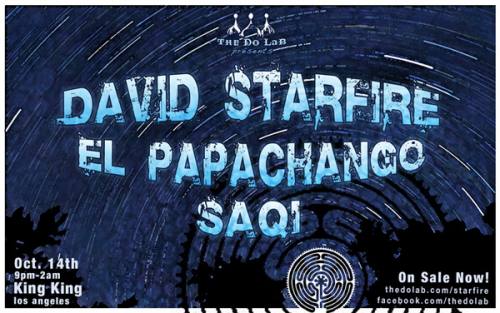 What: The Do Lab presents David Starfire and more


Join us on Thursday October 14th for a night of body-and-soul-moving-music featuring David Starfire, El Papachango and SaQi!

David Starfire is a producer, composer, multi-instrumentalist and DJ based in Los Angeles and San Francisco. His production style is eclectic, fusing world music with dance and hip hop and everything in between. He’s developed quite a following and his unique sound is catching the ears of music fans across the globe.

Half papa, half monkey, really means Universe! Diego Novoa aka El Papachango grew up in Buenos Aires, Argentina, where he began his career as sound engineer and dj, tinkering around with speakers and amps at the ripe age of fifteen.

They call him El Papachango because he mixes from a diverse palette of electro, ragga, breaks, and hip-hop, creating a musical journey that has Universal appeal: sassy, playful, suave, and sometimes downright naughty, but always with a spicy Latin flavor.

The Portland-based artist saQi is a classically trained composer, producer and trumpet player. Drawing his name from the Sufi title for a mystic muse, saQi creates eclectic electronica that maintains a balance between organic and synthesized sound. His live sets rock the dance floor while maintaining a grace and musical depth to engage the listener. The music is never limited by genre, tempo or any other stylistic elements. Allegiance to the creative flow and its truest expression thereof is saQi’s manifesto.