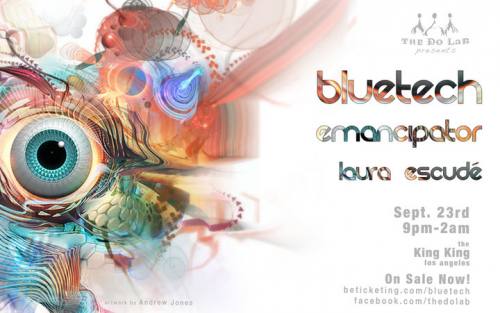 What: The Do LaB presents Bluetech & Emancipator

We are extremely excited to be bringing Bluetech along with Emancipator back to the King King on Thursday September 23rd! To be completely honest, they are two of our favorite! They both blew our minds and lifted our hearts during Lightning in a Bottle! Did we mention that they're brilliant electronic musicians?? Well they are!!!

Join us for a night of world class music, new and old friends, and tons of beautiful smiling faces.

A classically trained pianist and master of the art of software production. Bluetech's love of the melodic and exquisite sense of sound design makes him one of the most ingenius producers today. Avoiding limitation by subgenre or stylistic restrictions, he is always looking to explore fresh ideas with his instantly recognizable attention to detail and unique production aesthetic. While encompassing musical touches from different parts of the globe, he presents a total blend, crossing genres and borders.

Bluetech has created a label called Native State Records to release his own music and music from other artists who cross boundaries between ambient/chill and more idm/experimental sounds. Not content to stay at home, Bluetech has toured extensively and performed in Japan, UK, Germany, Spain, Italy, Croatia, France, Denmark, Mexico, United States, and Canada.

To some, it must seem like this young electronic producer came out of nowhere this year. Emancipator played his first live show in July 2009, opening for Bonobo at the Roseland Theater (cap. 1500). Since then, he’s toured with Bassnectar, STS9, Pretty Lights, drawn crowds at festivals like Trinumeral and Symbiosis, and closed out Sound Tribe Sector 9’s late night parties in Denver at the request of the band.