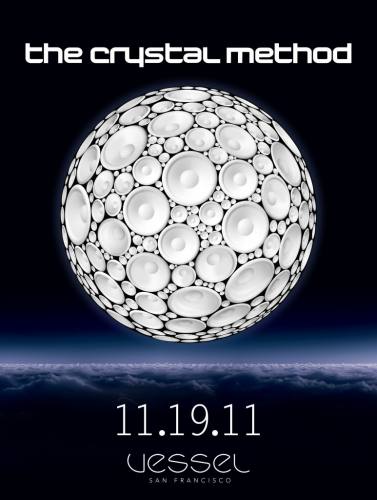 What: The Crystal Method @ Vessel


Heralded as one of the best live dance acts on Earth, THE CRYSTAL METHOD perform up close and personal at Vessel! For the past 10-plus years The Crystal Method have pumped dancefloors with anthems (“Now Is The Time,” “Keep Hope Alive”), and produced airwave smashes (“Trip Like I Do”) and a willingness to collaborate with an array of talent, including rock’s elite like Scott Weiland, New Order’s Peter Hook and Filter’s Richard Patrick. The duo has dominated the remix, film soundtrack, television, gaming and advertising worlds.


Their platinum-status debut album Vegas (released in 1997) is one of the biggest-selling electronic albums of all time, landing them in the top five of best-selling electronic acts in America. They scored the film London as well as the themes for TV shows “Bones” and “Third Watch” and were the first act to work with Nike for their running soundtrack series, but it’s the Grammy-nominated, Divided By Night, their 2009 studio album, that took THE CRYSTAL METHOD to all new heights.


The Crystal Method recently released Vegas (Deluxe Edition), a two-disc deluxe set marking the 10-year anniversary of the original album. The album also includes a selection of rare and live recordings plus new mixes of classic Vegas tracks from remixers personally chosen by the duo such as Paul Oakenfold, MSTRKRFT, Hyper, Sta, Deadmau5, Koma & Bones, Tom Real vs. The Rogue Element and Myagi.


The Crystal Method are settling in to their newly designed state of the art studio and beginning work on their fourth full-length album.


As one of the fastest rising stars in the Bay Area music scene John Beaver has been known to destroy dance floors. With his uplifting electro trance style he has been compared to such talent as TIESTO and FERRY CORSTEN. He started out as a resident DJ for nationally know companies such as Clockwork (Metropolis/Atlantis), Coolworld (Cyberfest/Plant New Year) and Skills DJ Workshop (Popsicle/Love). In 2004 he landed an exclusive spot as a resident DJ at 1015 folsom, San Francisco’s premiere nightclub! In the last couple of years he has opened for major acts such as Ferry Corsten, Above & Beyond, Paul Van Dyk, Benny Benassi, Wolfgang Gartner, The Thrillseekers, Andy Moor, Simon Patterson, Aly & Fila, Ronski Speed, Darude, Blank & Jones, Kyau & Albert, Steve Aoki and the list goes on. In 2006 John embarked in a new direction by creating Libra Rising Recordings with J Scott G formally of Deepsky and the now current-Summer Channel. With smash hits such as “Undertow” and “1000 Miles” played by most all of the top djs in the world this will be a label to look out for in the future! If you get a chance, come watch this rising star before he becomes the international superstar he is destined to be!