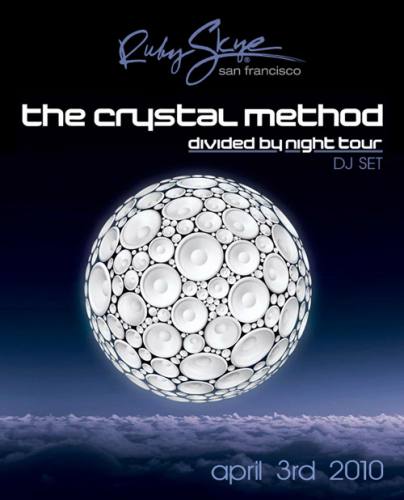 What: The Crystal Method @ Ruby Skye

Ruby Skye, Mixed Elements & FlirtyFlirty Present
THE CRYSTAL METHOD
The Crystal Method is an American electronic music duo that was created in Los Angeles, California by Ken Jordan and Scott Kirkland in the early 1990s. The Crystal Method's music has appeared in numerous TV shows, films, video games, and advertisements. Their best-selling album, Vegas, was certified platinum in 2007.
Divided by Night, electronic duo The Crystal Method's fourth studio album was nominated at the 52nd Grammy Awards for Best Electronic/Dance Album.