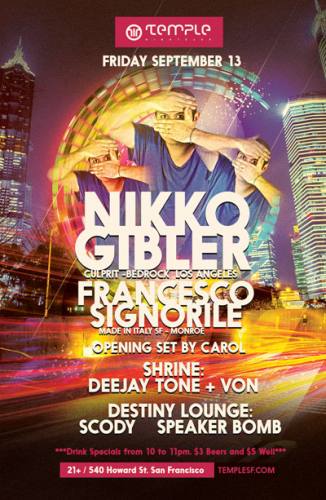 
Free Entry before 11PM with RSVP!


Nikko Gibler's DJ career spans over a decade. The past 18 months Have seen a whirlwind of travel That HAS taken him to Paris, London, New York, Miami, Milan, San Diego, Vienna, Barcelona, ​​Istanbul, Berlin, Los Angeles, Mexico City, San Francisco and Salento to name a few. Francesco Signorile Began His career in 1992 working for a FEW local radio stations in His hometown in Italy. Two years later at 17, he was spinning Already at the best club in PAXI (Greece), Disco Phoenix. He HAD to put His DJ career on halt A Few years ago, aims Decided Pursue His passion again on 5/19/11 by starting a fantastic project with Nader Marvi at Monroe Lounge in San Francisco. Currently he is the Resident DJ at Monroe Lounge on Broadway Street in San Francisco ..... And HAVING never lost his European style, he still loves his club! For VIP Batchlorettes or Any Large Group please e-mail: saeed @ templesf . com For VIP Bottle Service please email: natalie@templesf.com
About | Advertise | Contact | FAQs | Terms of Use | Privacy Policy © 2020 - TheUntz.com. All rights reserved.