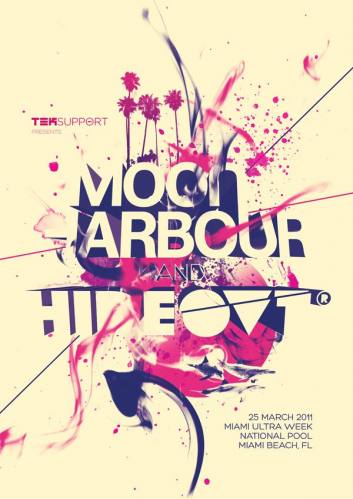 What: Teksupport presents Hideout vs Moon Harbour Recordings at The National Hotel

TEKSupport from NYC is making their annual trip down to sunny Miami for a week of fun and silliness. On Friday, March 25th they have prepared a Pool clash between two of the most sought-after labels out there, Moon Harbour Recordings vs. Hideout Music. This ground-breaking event will take place at the Pool Side of the The National Hotel.

The head honchos of the Italian powerhouse Hideout, Davide Squillace and Luca Baccetti will present in style along with their Label mate Carola Pisaturo. Also on the lineup for Hideout will be the always cheerful and groovy Audiofly, along with Argentinean music maestro Guti, who will be playing his highly praised Live Set. Representing Moon Harbour will be its main man, Matthias Tanzmann with the eclectic producer of mystical underground music, Boris Werner and the groovy Luna City Express guys. Rounding up the night will be the man which needs no introductions; Dubfire, who will be playing as a special guest.

Since its foundation in 2000, the Leipzig- based label Moon Harbour Recordings has come a long way. Fully committed to deephouse in the beginning, the releases on Moon Harbour have become more functional over time, but without losing in complexity and warmth. It has been mainly Matthias Tanzmann, the founder and label head, who has shaped the label’s musical development. Not only local acts, like the label head, but as well international acts release their music on Moon Harbour.

Hideout Music is run by Davide Squillace and Luca Bacchetti. The Italian imprint is free from labels like Techno, Minimal or House. Its trademark is sexy, quality dance music. It's momentum, emotion, inspiration, expression of the here and now of the artists involved. The project brings different artist together to get creative. It’s always fun to exchange both technical knowledge and inspiration, making a track based on a common emotion, beyond words and concepts. This mix of different tastes, backgrounds and visions creates something new: Hideout Music.