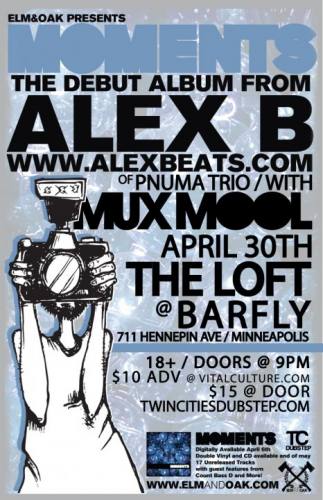 Friday, April 30th 2010, Alex B & Mux Mool + more
The LOFT at barfly (18+)
$10 advance at vitalculture.com
$15 at the door
Alex B
http://www.alexbeats.com/
http://www.myspace.com/pnuma
If there is a spare minute in Alex B’s life, it is spent in the studio working on music. His use of a dizzying mixture of analog hardware and newer digital technology give him a signature sound that is difficult to pin down to just one (or two or three) genres. Layers and layers of synthesizer, bass and enticing effects are laid over broken hip-hop and down-tempo inspired beats to create rich textures with a jazz undercurrent.
The lush and dynamic quality of his music is a product of the time and care put into every element. Alex B takes sound design to the level of intricate craftsmanship, where every detail is scrutinized and refined.
MUX MOOL - http://www.myspace.com/muxmool
“I know it’s electronic music,” Brian Lindgren says, “but sometimes I feel like an old-timey traveling musician with an M-Audio Trigger Finger instead of a guitar.” As Mux Mool, Lindgren has been criss-crossing the country by himself for years, collecting records, loops, and samples, and rocking parties in towns both large and boondock-small. Lindgren is a self-confessed nerd to the bone, an incurable doodler, a Star Trek: The Next Generation fan; he lives on energy drinks and barely sleeps, spending his days working on music and his nights absorbing Internet memes by the hard-drive load. Mux Mool’s homespun electro hip-hop is the product of an introverted mind, an extroverted imagination, and a bottomless cultural appetite.
Lindgren’s life in music began in Minnesota with a cheap toy sampling keyboard (“I remember being so fascinated by how much a sound changed when you dropped it down several octaves”). Flash forward a few years (and more than a few keyboards), and the teenage Lindgren began recreating his favorite sounds—Dilla’s stutter-step beats, classic video-game music, abstract electronic noise—using software and digital effects, glazing them with tape hiss and vinyl static. An early Mux Mool track, the slinky strut of “Lost and Found,” was discovered by Moodgadget Records and released on their Rorschach Suite compilation, eventually finding its way onto iTunes’ Best of 2006 Electronic list. A string of EPs, tracks, and remixes followed, including the song-a-day project Drum EP, the grimy talkbox anthem “Night Court” on the Ghostly International/[Adult Swim] comp Ghostly Swim in 2007, and the Ritalin-fueled “Ballad of Gloria Featherbottom” on 2009’s Moodgadget-curated Nocturnal Suite on Ghostly. Mux Mool’s 2010 full-length debut, SKULLTASTE, is the culmination of years of toil and experimentation, gathering Lindgren’s myriad talents and obsessions into one gloriously sprawling document.
As for where he got that name, Lindgren offers up an oddly telling story: he was dubbed Mux Mool by a band he admired, after he posted a blog on MySpace soliciting fans to submit names for his project. “Mux is short for ‘multiplexing,’ which is the streaming of many types of information through one channel,” he explains, “and Chac-Mool is an ancient Meso-American statue of a reclining man.” A technologically complex breed of synthesis and a timeless piece of indigenous art. Sounds about right