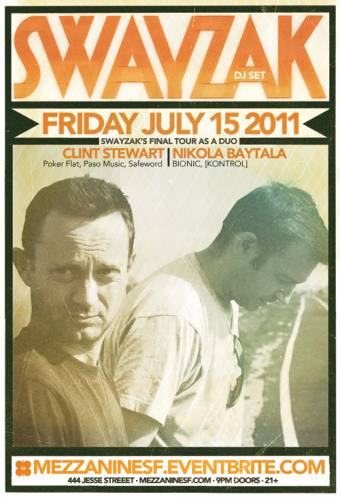 
Swayzak is a British tech house duo that consists of James Taylor and David Brown. They live and work in London and released their first 12” single “Bueno/Fukumachi” in February 1997 to much acclaim. It was followed up by the 12” “Speedboat/Low Rez Skyline” to become part of the burgeoning tech-house scene in the UK.

Their debut long player, “Snowboarding in Argentina,” was released by The Medicine Label (USA) and Pagan Records (UK) in May 1998. It garnered many positive reviews. The album was later chosen as 1998 Album Of The Year in the US dance publication Mixer.

Their album “Dirty Dancing” is only to be unique part of New Electro and Electroclash movement. It is the reason to be disliked by the old fans as non-minimalist, electropop with childish lyrics. From a different point of view it is considered Swayzak’s only multivalent achievement to be historical not as a part of a style but as holistic work of social related art.