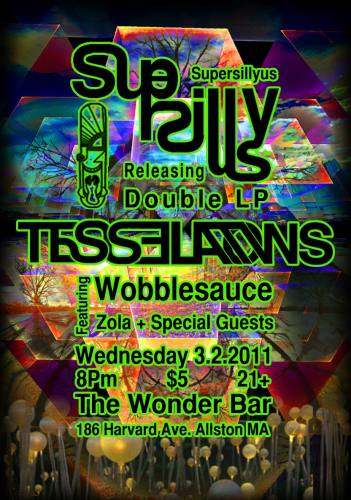 in conjunction with Wobble Wednesdays

He will be supported by his good friends Wobblesauce

The event will feature live painting and local art/clothing/jewelry vendors.

If anyone is interested in either vending, art installations, or live art please contact Phil at Skylon23@gmail.com

Is an electronic musician and producer based in Allston, MA. His music is a genre-bending adventure through psychedelic dub. He has opened for acts such as Hallucinogen, Conspirator, Archnemesis, EOTO, DJ Logic, and Alex B (of Pnuma Trio). His first full length release, Grampaspaceshuttle, tickled the ears of the electronic community, earning him a spot on LostinSound.org's Top 5 Newcomer Albums of 2010.

He has spent... the past year and three months meticulously crafting his second record, “Tesselations,” which will be released this March on Base Trip Records. The result is an epic double album that will allow listeners to explore highly evolved and extensively layered soundscapes while shaking it to a tasty mix of tribal drums, swirling synths, and the occasional marimba solo.

To give fans a taste of things to come, he is releasing ME(meta)TATRON, an exclusive preview of "Tesselations" which features three tracks off the album as well as a remix, and a bonus track which won't be found anywhere else.