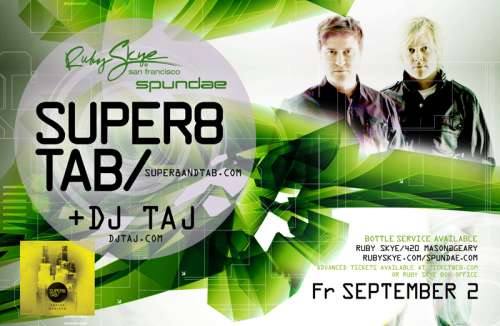 
“It’s a rare and wonderful thing to be blown away by an album on first listen. And that’s exactly what Super8 & Tab’s debut artist album does.” Mixmag

When did trance get this darn good again?


Only a select number of modern trance artists can convincingly say they are taking the sound to the next level. Although the humble, softly spoken duo would never shout it out themselves, Super8 & Tab are undoubtedly among them.

Renowned for their innovative approach and intricate production values, the Finnish producers have stealthily pushed themselves to the front of the trance pack since coming together in 2005.

DJs like Armin van Buuren, PVD, Above & Beyond & Ferry Corsten regularly smash their tracks both club-side and on the radio, while global dance bibles such as Mixmag and DJmagazine laud them with 5 star reviews.

Through their own energising DJ sets, Super8 & Tab themselves have conquered some of the biggest club brands in the game. They headlined the Future stage at this year’s Trance Energy, recently played Australia’s Future Music Festival and have also rocked trance totem poles like The Gallery, Mayday, Godskitchen, Trance Energy and A State Of Trance. On home turf, they command a legendary residency at Helsinki’s legendary Hallmark club and also find time to hold down a regular spot on the monthly Anjunabeats Worldwide radio show.


Now an integral part of the Anjunabeats family, Super8 & Tab first caused a fervour with the breakthrough success of tracks like ‘First Aid’ and the definitive ‘Helsiniki Scorchin’. Since establishing themselves as the label’s best selling artist behind Above & Beyond, the Finnish trailblazers have delivered trance of the highest quality ever since  - their ethereal epic ‘Suru’ was picked out by DJmagazine as “the tent-pole release of Anjuna’s summer”, while ‘Elektra’ conquered the download charts and festival stages with equal aplomb in 2008.

In 2009, their star rose further still when German trance godfather Paul Van Dyk requested them to remix both his ‘New York City’ anthem and the equally large ‘Nothing But You’, while Ferry Corsten requested the magic Super8 & Tab touch on his vocal anthem ‘Made Of Love’. Crowning a year of unchecked success, it was little surprise when Super8 & Tab broke into the DJmagazine Top 100 for the first time at #82.

Now with the arrival of their debut artist album ‘Empire’, Super8 & Tab are elevating to the grander stage they were always destined for. Drawing on the diverse vocal talents of Jan Burton, Betsie Larkin, Alyna and Julie Thompson, ‘Empire’s 11-track journey sees Super8 & Tab stamp their distinctive skills on deep, brooding vocal anthems, classy downtempo excursions and futuristic trance fusions – with plenty of their trademark forward-thinking melodic sound besides.

An instant classic it prompted Mixmag to say “It’s a rare and wonderful thing to be blown away by an album on first listen. And that’s exactly what Super8 & Tab’s debut artist album does.”

And with comments like that, maybe they don’t need to sing their own praises after all.