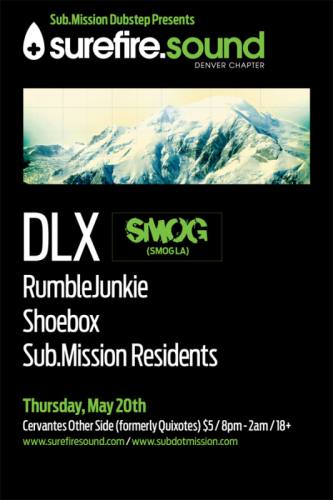 Surefire Sound Denver Chapter
DLX
http://www.myspace.com/doctorlazarusx
http://smogla.com/crew_dlx.php
DLX aka Doctor Lazarus X came to Los Angeles from North C arolina and hit the hot streets of the city runn ing, performing his first gig as an opener for Kode9 at a Pure Filth show. The crowd was already familiar with his brand of beats however, as cohort Knife Dreams had dropped one of his tracks at a previous Smog party that sent the crowd into ecstatic spasms and had them chanting for a ‘REWIND!’ The man behind the mania was soon signed to the first dubstep label in Los Angeles, Steps in Time Recordings, and went on to release “Matter of Fact” on the SMOG label, a banger that became a massive hit of 2008.
This badman of beats is shows no trace of slowing down; now booked through San Francisco’s Surefire Agency, DLX is signed to Flying Lotus’ forward-thinking Brainfeeder imprint and is also working on an album for SMOG as well. The deep level of skill evident in DLX’s stack of releases and remixes make this resident a most welcome mainstay not only in the local LA dubstep scene, but on dance floors around the world as well.
Lastest Mix: http://www.sendspace.com/file/obmxrk
Local Support:
RumbleJunkie
Shoebox
Cervantes Other Side
$5
About | Advertise | Contact | FAQs | Terms of Use | Privacy Policy | Accessibility Policy © 2022 - TheUntz.com. All rights reserved.