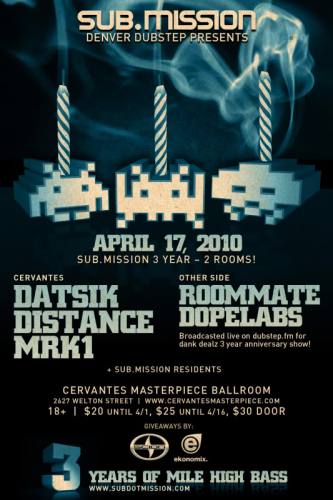 Join us as we celebrate 3 years of BASS with 2 rooms of dubstep featuring the main players of the scene. With a variety of sounds, this night is sure to make everyone skank out!!!
April 17, 2010
CERVANTES
DATSIK
http://www.myspace.com/djdatsik
Only in the Dubstep scene a short time, 21 year old Datsik (Troy B.) has wasted no time by making his presence be known internationally, introducing his own unique style of industrial sounding futuristic beats and heavy dance floor stomping rhythms. His latest successes on the Beatports “Top Download” charts are a testament that his music is being recognized by listeners all over the world, with multiple releases hitting number 1 on Beatport and Chemical-Records for extended periods of time. It is very well possible that he has been the first dubstep artist to ever hold 5 out of the top 10 best selling tunes at once on Beatport. He has also earned the attention of some of the most notable and influential acts in the scene to date such as Bassnectar, Skream, Rusko, & DJ Craze, to name a few. With the Rottun Recordings label behind him, he has been hard at work, working on many tunes, collaborations, and remixes for some of the biggest names in the world. In a genre with increasing popularity, he continues to devote his time and energy into pioneering a distinct sound that will transform it to the next level, and set him above the rest.
DISTANCE
http://www.myspace.com/djdistancedub
Part of the small nucleus of South London based Dubstep innovators, Distance has been a name on everyone's lips since day one, and is widely recognized as having helped to lay the foundations of what dubstep is and develop what it has become. Fostering a unique sound, Distance as producer, DJ and label owner has been pushing things in a direction all of his own. Gathering early support from the legendary John Peel and going on to be part of the utterly seminal Dubstep Warz show on Radio 1 presented by Mary Anne Hobbs, Distance has forged a name for himself as a critical figure in the scene. As a stalwart of the all the biggest dubstep raves (DMZ, FWD and Exodus) and with bookings notched up around the world, he is very much at the forefront of the scene and in high demand. From deep to devastating in one dubplate switch up, Distance truly knows how to tear up the dance. No one does it like him.
MRK1
http://www.myspace.com/mrk1
MRK1 has been making music for the last 10 years. He began making dnb and then progressed into Dubstep/Grime.
MRK1 was one of the first producers to pioneer the dubstep sound and was responsible for some of its first releases.
MRK1 grew with the dubstep sound that is now an internationally recognized music that is played and sold all over the world.
MRK1 has released many tunes over the years and has sold thousands of records across the world and is one of the genres top record sellers.
Releases on Tempa, Soulja, Vehicle, Rephelx, Polydor, Wall of Sound, Texture, Techonic, Earwax, Terra Rhythm to name a few has seen MRK1 become one of the leading producers in this genre.
CERVANTES OTHER SIDE
Sponsored by Dubstep.fm - Join us as we celebrate 3 years of blazing out the studio for Dank Dealz.
Saturdaze at 4:20 MST
ROOMMATE
http://www.myspace.com/roommatedub
Roommate is an animal! His tireless efforts in both production and mixing have currently brought him to the forefront of American dubstep.
Consistantly pushing the production envelope with his unique and upfront style, Roommate has successfully realesed a grip of bass booming smashers on well respected labels such as Argon, 10bag & Full Melt as well as his own label Hollow Point Recordings.
With 8 years of solid Dj’ing, and tunes that’ll crack your teeth, you can bet that Roommate has secured a title in the future and growth of dubstep music. Expect a HEAVY, dance friendly vibe rooted deeply in the dub fashion with plenty of original material to nice up the dance. Come get inspired by a true rising artist and check out Roommate’s other projects Babylon System & OSC.
DOPELABS
http://www.myspace.com/dubstepfm
Founder of dubstep.fm
Giveaways by our sponsors: Scion and Ekonomiks Clothing
Free giveawys by Sub.mission and Dank Dealz.
$20 before April 1/ $25 before April 16/ $30 day of and at the door
We have opened up both rooms of bass for the three year in hopes we do not have to turn anyone away.
BUY PRESALES TO GUARANTEE A SPOT ON THE DANCE FLOOR!!!!
Cervantes/ The Other Side
2637 Welton
Denver
BUY TICKETS HERE:
http://www.cervantesmasterpiece.com/show/detail/28112
Afterparty at the Wouldshop!!!
21 and up
$10 FREE BEER
For info hit up a Sub.mission Member or Wouldshop Crew.