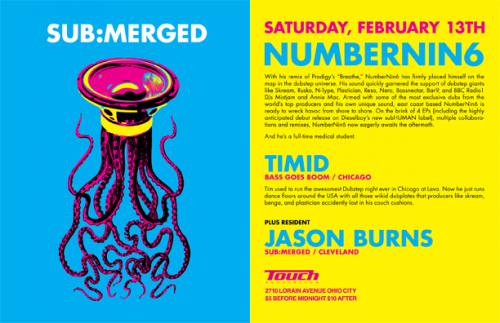 SUB:MERGED PRESENTS:
NUMBERNIN6
With his remix of Prodigy’s “Breathe,” NumberNin6 has firmly placed himself on the map in the dubstep universe. His sound quickly garnered the support of dubstep giants like Skream, Rusko, N-Type, Plastician, Reso, Nero, Bassnectar, Bar9, and BBC Radio1 DJs Mistjam and Annie Mac. Armed with some of the most exclusive dubs from the world’s top producers and his own unique sound, east coast based NumberNin6 is ready to wreck havoc from shore to shore.On the brink of 4 EPs (including the highly anticipated debut release on Dieselboy’s new subHUMAN label), multiple collaborations and remixes, NumberNin6 now eagerly awaits the aftermath.
And he’s a full-time medical student.
TIMID (Chicago, IL)
Tim used to run the awesomest dubstep night ever in Chicago at Lava. Now he just runs dancefloors all over the US with all those wikid dubplates that producers like Skream, Benga and Plastician accidentally lost in his couch cushions.
AND SUB:MERGED RESIDENT:
JASON BURNS
$5 before midnight
$10 after
FEBRUARY 13TH 2010
21+
10pm-2:30am
Touch Supper Club
2710 Lorain Ave
Cleveland, OH 44113
(216) 631-5200
www.touchohiocity.com